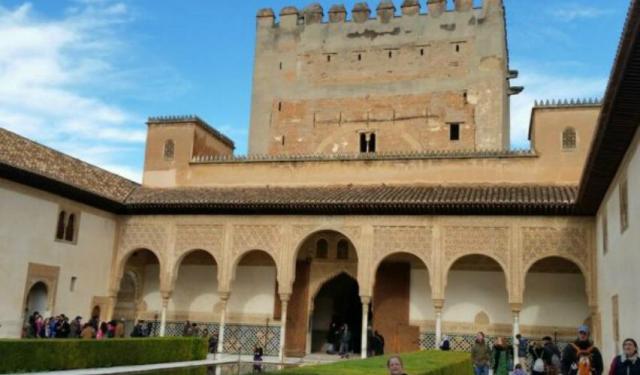 The Alhambra: The Most Stunning Moorish Castle, Granada, Spain (B)

As I read a book about Queen Katherine of Aragon and listened to her describe the Alhambra my imagination went crazy. I pictured an amazing Moorish Castle that was just so brilliant that words could never do it justice. For years it sat in the back of my mind and I didn’t think much more about it until we decided to spend some time in Granada, Spain on our last trip. It was the number one place on my list to visit once the dates were confirmed. I went back to that story and I had pictures in my mind of what I thought it would look like but there was no way I would ever be able to picture its magnificence…even with an imagination like mine!

The Alhambra, Granada is a Moorish Castle dating back to around 889 AD where it was originally a Roman Fortification. After the construction was finished by the Romans is was basically left to fall apart and became a ruin. In the 13th Century, it was found by Moorish emir Mohammed ben Al-Ahmar of the Emirate of Granada. He is the one who is responsible for its current palace and walls but it was Yusuf I, Sultan of Granada who made it into a Royal Palace in around 1333. ...... (follow the instructions below for accessing the rest of this article).
This article is featured in the app "GPSmyCity: Walks in 1K+ Cities" on iTunes App Store and Google Play. You can download the app to your mobile device to read the article offline and create a self-guided walking tour to visit the attractions featured in this article. The app turns your mobile device into a personal tour guide and it works offline, so no data plan is needed when traveling abroad.