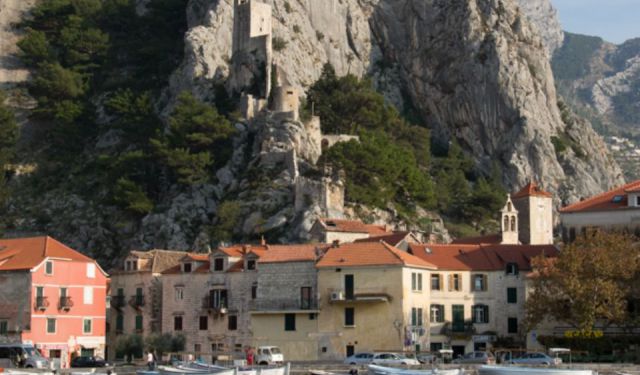 The Ancient Pirate Stronghold of Omis in Croatia, Omis, Croatia (B)

I arrived in Omis in the Dalmatia region of Croatia by boat. The Cetina River has played a vital part in the history of the town. The famous pirates or corsairs of Omis would seek shelter in the river’s estuary after plundering the surrounding coastline. I was not sailing into town in an elegant galleon but chugging along in a little pleasure boat. Nevertheless, I was enjoying the same scenery. Across the water the reed bowed and straightened at the command of a light breeze. Above me the bare grey rocks of mountain peaks glinted in the sunlight skirted by trees of deciduous forests. Perched on these rocks I could see the old defences of the town, two imposing fortresses.

After disembarking I crossed the bridge over the river and headed straight for the sea front. This little town is sandwiched between its river and Croatia’s Adriatic Coast making it both vulnerable and impregnable depending on its relationship with surrounding neighbours. During the Middle Ages the pirates or corsairs of Omis were infamous. Their ships, built for attack and flight, would plunder the coastline before fleeing to the shelter of the river estuary. This estuary was guarded by a strategically placed fortress. This estuary was guarded by a strategically placed fortress, Fortress Mirabella also known as Peovica. From this fortress the pirates could see ships approaching and would quickly set sail to plunder them. They became one of the most powerful and fearsome pirates in the whole Mediterranean Sea. Their success depended on alliances with their neighbours which guaranteed safety from land-based attacks and it continued for three centuries.  ...... (follow the instructions below for accessing the rest of this article).
This article is featured in the app "GPSmyCity: Walks in 1K+ Cities" on iTunes App Store and Google Play. You can download the app to your mobile device to read the article offline and create a self-guided walking tour to visit the attractions featured in this article. The app turns your mobile device into a personal tour guide and it works offline, so no data plan is needed when traveling abroad.