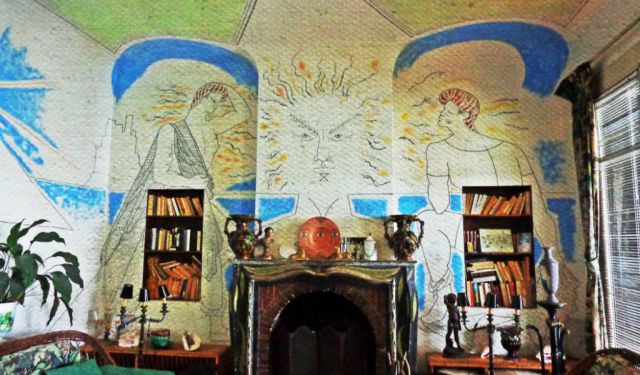 The Artist Who Came to Dinner and Never Left, Nice, France (B)

What would you do if you invited someone to spend a week at your holiday home and he decided to redecorate it and then he decided to stay – indefinitely? Francine Weisweiller was thrilled.

In 1950, when Francine met Jean Cocteau, she was a 34 year old Parisian socialite bored with her bourgeois lifestyle. Cocteau was a 61 year old artist and writer overseeing the making of a film based on one of his books, “Les Enfants Terribles”. They were introduced by Francine’s cousin, who was an actress in the film and a friendship immediately bloomed between them.

When the movie was finished, Francine invited Cocteau and his 25 year old companion/adopted son, Edouard Dermit, to spend a week at her holiday home on the French Riviera. It was in the village of Saint-Jean-Cap-Ferrat which had once been known as Cap-Saint-Sospir after a sixth century monk who had lived in the area. Francine adopted the name and her villa became Villa Santo Sospir.

After just a few days of rest and relaxation at Santo Sospir, Cocteau was ready for another project. Since most of the walls in Francine’s newly acquired villa were bare and white, they reminded him of giant canvases and they called out to him to decorate them. He asked Francine if he could make a charcoal design over the fireplace, she immediately agreed and a drawing of Apollo, the sun god, appeared. ...... (follow the instructions below for accessing the rest of this article).
This article is featured in the app "GPSmyCity: Walks in 1K+ Cities" on iTunes App Store and Google Play. You can download the app to your mobile device to read the article offline and create a self-guided walking tour to visit the attractions featured in this article. The app turns your mobile device into a personal tour guide and it works offline, so no data plan is needed when traveling abroad.