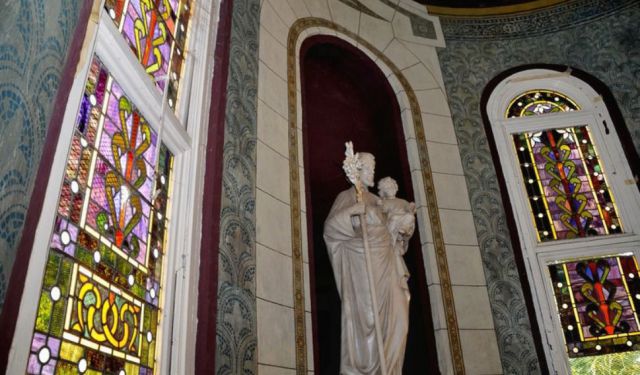 Like a beacon, its 85′ copper dome guides the faithful to its doors. It was built in 1911 to replace the original Roman Catholic church that was constructed in 1811 and destroyed by earthquake in 1907.

The new building, of Byzantine architecture, was commissioned in 1908 by the Catholic community and U.S. Bishop John Collins. It was designed and constructed by Walker-Fyche, a Canadian company at a cost of US$150,000. The artwork was created by Jesuit Lay Brother Francis Schroen. It is believed to be one of the largest of his work.

Sadly, the murals were painted over in the 1970s either because they had deteriorated over the years and there were no funds to restore them, or in response to liturgical trends following Vatican II, they were considered a distraction. ...... (follow the instructions below for accessing the rest of this article).
This article is featured in the app "GPSmyCity: Walks in 1K+ Cities" on iTunes App Store and Google Play. You can download the app to your mobile device to read the article offline and create a self-guided walking tour to visit the attractions featured in this article. The app turns your mobile device into a personal tour guide and it works offline, so no data plan is needed when traveling abroad.