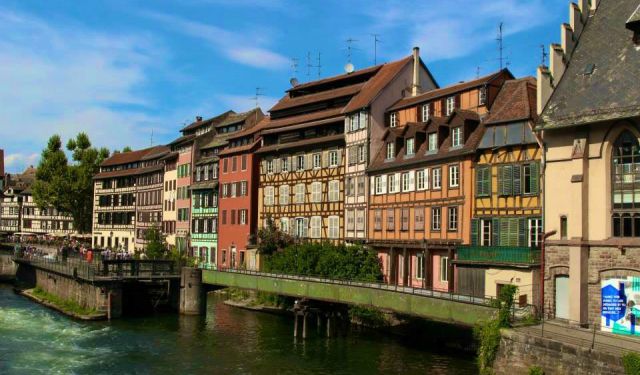 Situated in one of the most beautiful regions between France and Germany, Strasbourg straddles the border between the two countries, following the Rhine. This region’s beauty has switched nationalities four times since 1871 as the two countries have long played tug-of-war over this area, leaving behind both architectural and cultural aspects.

Strasbourg is a medieval city center mixed with a modern day metropolitan city. This town has many names it is known by, “Capital of Alsace”, “”Official seat of the European Union” as well as “Home to Europe’s oldest Christmas Market”.

Like Colmar, what draws people here is the beauty of the half-timbered houses that are scattered throughout the entire town, as well as Europe’s sixth largest cathedral, depending on if you speak French: Cathédrale Notre-Dame de Strasbourg or German: Liebfrauenmünster zu Straßburg or more simply, the Strasbourg Cathedral. Today, it is one of the finest examples of Gothic architecture. I absolutely fell in love with the tall red doors with brass embellishments. ...... (follow the instructions below for accessing the rest of this article).
This article is featured in the app "GPSmyCity: Walks in 1K+ Cities" on iTunes App Store and Google Play. You can download the app to your mobile device to read the article offline and create a self-guided walking tour to visit the attractions featured in this article. The app turns your mobile device into a personal tour guide and it works offline, so no data plan is needed when traveling abroad.