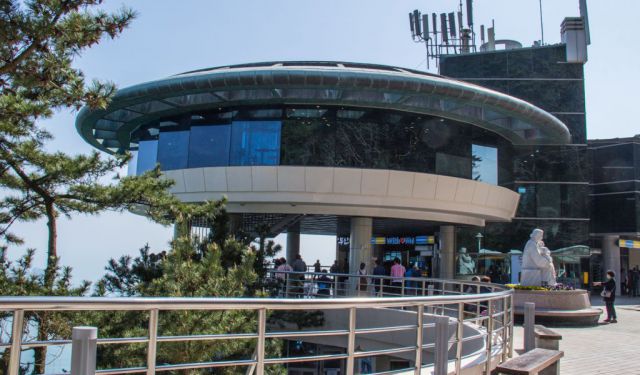 Busan is the second largest city in South Korea. it sprawls from the foothills of the Taebaek Mountains to off-shore islands the largest of which is Yeongdu and a district of the town. I wanted to see as much as possible during the one day I was there. The Busan City Tour seemed to offer the best solution. The tour started at Busan Railway Station so I headed there on the metro. Underneath Busan is a rabbit-warren of tunnels – with lots of entrances from street level – that connect with the metro stations. It is just a question of following the signs to the station required and then buying a ticket from the machines at the station. A very helpful gentleman at the station pointed out the bus I wanted and I was soon sailing past the harbour and across the Yeongdodaegyo Bridge

Busan is very proud of its bridges and the evening of my arrival I had taken the elevator to the top of the Lotte Mall where I had an excellent view of the town and harbour below. There were also information boards describing the bridges that cross between Yeongdu Island and the mainland. My bus tour crossed three of these bridges. Built in 1934 Yeongdodaegyo Bridge was the first bridge to be built connecting the island of Yeongdu-gu to the mainland. The bridge lifts to allow ships to pass between the south and north ports but this only happens once a day. Historically, this bridge has a poignant significance as it was here that refuges from the Korean war would wait for the parents and siblings from whom they had been separated. After driving around the island we crossed back to the mainland on the Gwangandaegyo Bridge (also called Gwangan-daero). This bridge is also a motorway and we were asked to put on our seat belts before we spiralled up the roller-coaster junction that took us on to the bridge. Stretching for over seven kilometres this modern bridge, that opened in 2002, is the second longest bridge in South Korea. At night the bridge lights up – its light exhibitions change with the season. From my elevated position, on top of the double decker bus, I could appreciate the panorama of the city surrounding me. ...... (follow the instructions below for accessing the rest of this article).
This article is featured in the app "GPSmyCity: Walks in 1K+ Cities" on iTunes App Store and Google Play. You can download the app to your mobile device to read the article offline and create a self-guided walking tour to visit the attractions featured in this article. The app turns your mobile device into a personal tour guide and it works offline, so no data plan is needed when traveling abroad.