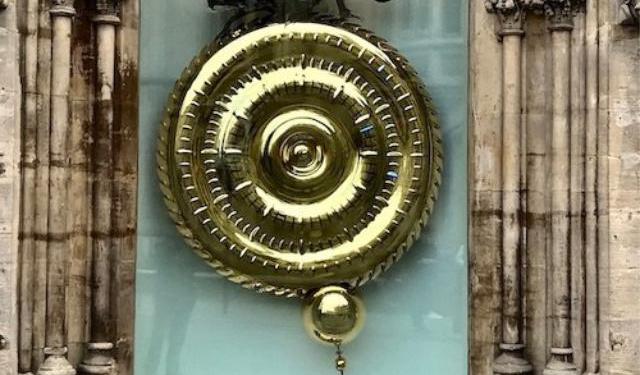 I always had a nagging suspicion that there was some little goblin out there somewhere who was eating up all my time. Whenever I would think I had plenty of time to do something, the time would just disappear. As it turns out, my suspicions were correct – and I found the little time-eating critter in Cambridge, England.

If you would like to see what this little pest looks like, you can find him at the corner of Bene’t Street and Trumpington Street. He’s perched atop an amazing piece of art that also functions as a clock. It’s known as the Corpus Clock because it’s on the Corpus Christi College building. You can get a good look at the little monster, because unlike most clocks, this one is at street level. This scary-looking creature is called a Chronophage and looks a lot like an evil, mechanical grasshopper. The word Chronophage comes from two Ancient Greek words “chronos” and “phage” and means “time eater.” And this minute-munching monster lives up to his name. With every minute that passes, his jaw snaps and he gulps it down, never to be seen again. ...... (follow the instructions below for accessing the rest of this article).
This article is featured in the app "GPSmyCity: Walks in 1K+ Cities" on iTunes App Store and Google Play. You can download the app to your mobile device to read the article offline and create a self-guided walking tour to visit the attractions featured in this article. The app turns your mobile device into a personal tour guide and it works offline, so no data plan is needed when traveling abroad.