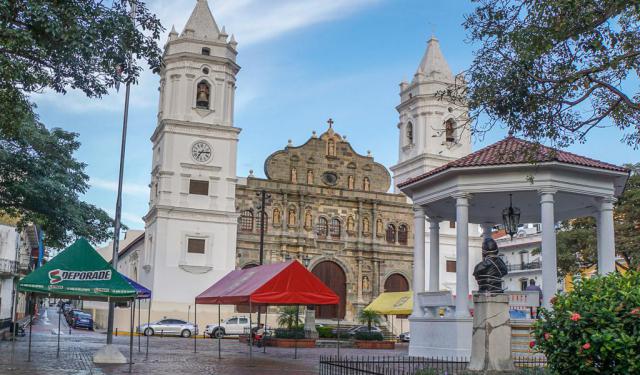 The Churches of Casco Viejo, Panama City, Panama (B)

While studying Spanish for two weeks at Casco Antiguo Spanish School in Casco Viejo, I spent much of my free time strolling the streets of the Old Town. I loved taking in the different scenes which range from ruins to restored buildings and everything else in between. Unlike many places in Europe, the churches are free to visit.

While I visited the churches at various times of the day, I found that popping in just before class between 7:30 and 8am or just after an early dinner before they close at 8pm are the most rewarding as the atmosphere is very tranquil. Both the art and architecture vary in each place of worship making each visit interesting, even for the non-religious tourist.

Iglesia de San José is located on Avenue A on the west side of Casco Viejo. The rectangular Augustinian temple was one of the first to be constructed in the Old Quarter. Destroyed by fire in 1737, it was later rebuilt and ultimately abandoned when an 1832 law abolished all convents. The church was used as a school chapel until the late 19th century upon the return of the religious order. ...... (follow the instructions below for accessing the rest of this article).
This article is featured in the app "GPSmyCity: Walks in 1K+ Cities" on iTunes App Store and Google Play. You can download the app to your mobile device to read the article offline and create a self-guided walking tour to visit the attractions featured in this article. The app turns your mobile device into a personal tour guide and it works offline, so no data plan is needed when traveling abroad.