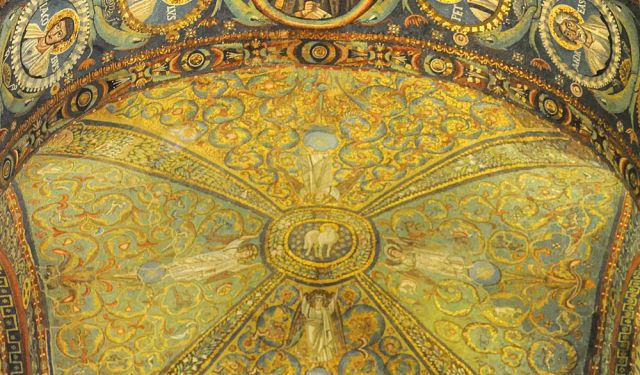 While I had heard of the Ravenna mosaics, I had no idea just what an amazing experience visiting them would be. They are among the most beautiful things I have ever seen and it is no wonder that these unique early Christian monuments are all listed as UNESCO World Heritage sites. I was lucky enough to visit 4 of the 8 sites, in and around Ravenna, with the Emilia-Romagna tourist board.

In the 5th century, Ravenna was the capital of the Roman Empire and also of the Byzantine Italy that followed, right up until the 8th century. The stuning Ravenna mosaic masterpieces that follow were all built in the 5th and 6th centuries.

As was the tradition the exterior of the Mausoleum of Galla Placidia is rather plain and gave no clue to the wonders inside. As I passed through the doorway, my eyes slowly adjusted to the light and I caught my breath at the sight of the lavishly decorated interior made of thousands of pieces of coloured glass. The iconography used represents the victory of eternal life over death. Each visitor is only allowed 5 minutes so as not to disturb the micro-climate inside but I think you’ll agree this is something that is well worth looking after. The lower portion of the walls are lined in marble but the upper portion and all the ceiling is covered in the most beautiful of mosaics I have ever seen. ...... (follow the instructions below for accessing the rest of this article).
This article is featured in the app "GPSmyCity: Walks in 1K+ Cities" on iTunes App Store and Google Play. You can download the app to your mobile device to read the article offline and create a self-guided walking tour to visit the attractions featured in this article. The app turns your mobile device into a personal tour guide and it works offline, so no data plan is needed when traveling abroad.