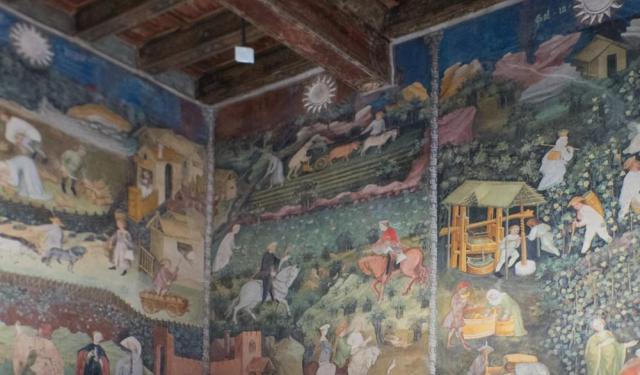 The Frescoes of Trento: The Painted City, Trento, Italy (B)

Italy is well known for its frescoes, but I’ve never seen so many in one place as in Trento, in the far north of the country. The pictures are everywhere, clinging to the sides of buildings like a kind of Renaissance street art. They are inside the buildings, too, most notably in the magnificent Castello de Buoncastiglio. So it is no surprise that Trento should be known as “the painted city”.

Frescoes are a particular type of mural, which can be painted on an internal or exterior wall. They are created by painting a picture onto wet plaster, so that the pigment becomes a part of the wall as it dries.

This creates a durable design, but has the disadvantage that the work has to be done very quickly before the plaster dries. Before starting work the artist would always make a full scale drawing (or “cartoon”) of the final picture which they would then trace onto the wet plaster before painting. Occasionally they would speed up the process by using a stencil for repeated motifs or images. ...... (follow the instructions below for accessing the rest of this article).
This article is featured in the app "GPSmyCity: Walks in 1K+ Cities" on iTunes App Store and Google Play. You can download the app to your mobile device to read the article offline and create a self-guided walking tour to visit the attractions featured in this article. The app turns your mobile device into a personal tour guide and it works offline, so no data plan is needed when traveling abroad.