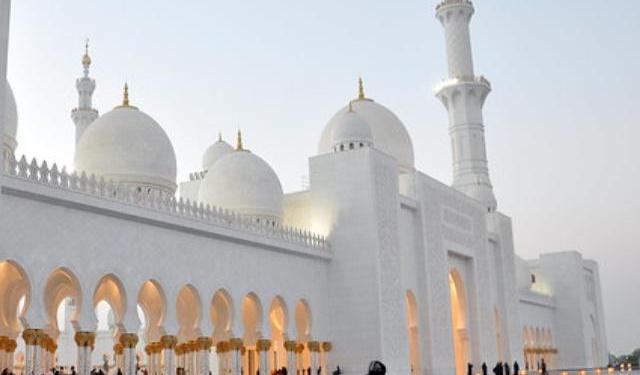 Abu Dhabi, being the capital emirate of UAE, is slightly overshadowed and looks less touristy than its counterpart Dubai. But let me share with you something I experienced. This largest emirate city has many stunning superlative attractions in its sleeve. Be it architectural, cultural, city vibe or natural. Following our Kayaking adventures in the mangrove forest, we are set to show you around this incredible architectural landmark – Sheikh Zayed Grand Mosque.

Sheikh Zayed Grand Mosque is one of the contemporary architectural wonders of the modern times. This modern mosque is often compared to Taj Mahal. Although, personally, I would never make comparison between these two, having seen both of them. They are both different and unique in their own ways. But truth be told, this mosque lives up to any such comparisons. The mosque is well built and is one of the striking architecture I’ve seen in the recent times. One glimpse at the mosque gives the feeling as if the mosque is immersed in snow. So pure, so white, that it camouflaged with the environment. The imposing dome and minarets dominates the skyline . ...... (follow the instructions below for accessing the rest of this article).
This article is featured in the app "GPSmyCity: Walks in 1K+ Cities" on iTunes App Store and Google Play. You can download the app to your mobile device to read the article offline and create a self-guided walking tour to visit the attractions featured in this article. The app turns your mobile device into a personal tour guide and it works offline, so no data plan is needed when traveling abroad.