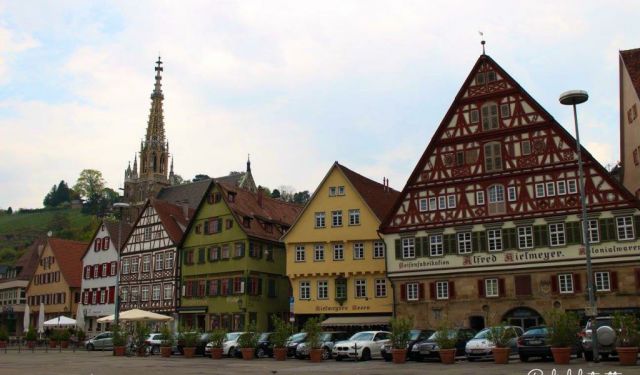 The Medieval Wine Town of Esslingen Am Neckar, Esslingen am Neckar, Germany (B)

When Americans think about traveling to Europe, they have an image in their heads of fairy-tale like towns that will transport them back to a time long since gone. They imagine towns with cobbled-stoned streets, colorful half-timbered buildings and perhaps a Knight in Shining Armour. But many don’t realize, nor can imagine the wrath of destruction that destroyed so much of Germany during the Second World War. However, there were a few towns and cities that managed to escape the fury of one of the most ruinous wars Europe had ever seen. The small town of Esslingen am Neckar is just one of those perfect examples of medieval towns that escaped unscathed.

Just a short train ride away, or even a quick 15 minute drive from Stuttgart, Esslingen am Neckar is a town few have ever heard of. But have no fear, it’s worth every ounce of effort to make it to this adorable little town.

Nestled in a valley surrounded by endless rows of vineyards along the Neckar river, Esslingen is the epitome of historic German towns. ...... (follow the instructions below for accessing the rest of this article).
This article is featured in the app "GPSmyCity: Walks in 1K+ Cities" on iTunes App Store and Google Play. You can download the app to your mobile device to read the article offline and create a self-guided walking tour to visit the attractions featured in this article. The app turns your mobile device into a personal tour guide and it works offline, so no data plan is needed when traveling abroad.