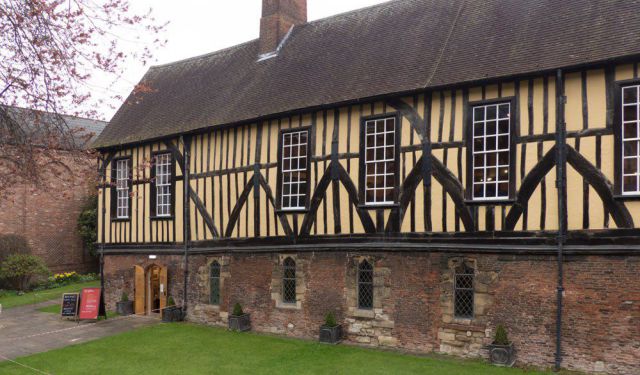 The Merchant Adventurers Hall and the Guilds of York, York, England (B)

As in many European cities, the social and commercial life of medieval York was dominated by the trade guilds. And in many ways they are still important today. One of the best ways of discovering the history and influence of the guilds is through a visit to the Merchant Adventurers’ Hall in York.

In the Middle Ages most cities had several guilds. These were early trade associations, bringing together people with particular trades or crafts, and promoting their interests. There were more than 50 craft guilds in medieval York. These included vintners, butchers and scriveners (people who wrote and illustrated manuscripts), and many others.

The most important and powerful guild in York was the Company of Merchant Adventurers. It was founded in 1356, originally for charitable and religious objectives, but it quickly acquired a commercial purpose. Its members were mostly mercers, who exported wool and cloth across Europe, and imported wine and other goods.

The Merchant Adventurers became even more powerful in 1581 when Queen Elizabeth granted them a monopoly over most goods imported into the city. In later centuries they widened their admission criteria to include politicians and businessmen. Membership could be by inheritance or nomination, and even today many members can trace their involvement through many generations. Notable Merchant Adventurers have included people from the Rowntree and Terry families, whose names are familiar to us through the chocolate companies they founded in York. ...... (follow the instructions below for accessing the rest of this article).
This article is featured in the app "GPSmyCity: Walks in 1K+ Cities" on iTunes App Store and Google Play. You can download the app to your mobile device to read the article offline and create a self-guided walking tour to visit the attractions featured in this article. The app turns your mobile device into a personal tour guide and it works offline, so no data plan is needed when traveling abroad.