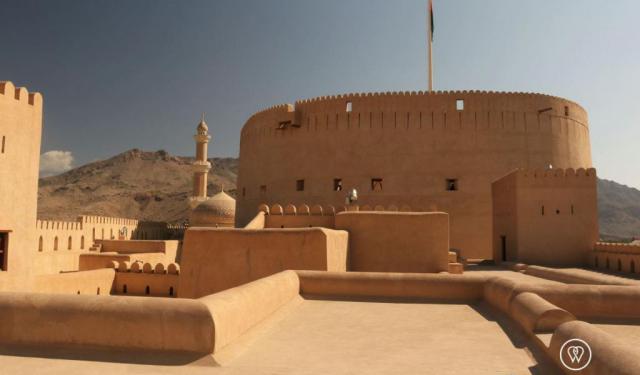 The Nizwa Fort, Oman's Most Visited Monument, Nizwa, Oman (B)

The Nizwa Fort nested among mountains and oasis with the souk spreading at the foot of its recognisable tower is a must-see.

When Oman converted to Islam peacefully and by faith in the 8th century, the idea to create a true Muslim state was paramount, and prior to today’s sultanate, the Imamate was ruling the country. Religious and political powers were consolidated in the hands of the elected Imam in the capital Nizwa (until the coastal Muscat became the capital in 1793). As such, Nizwa has been the centre of religion and also of politics for many centuries, calling for new standards for fortified buildings in a land divided among many tribes.

The 9th century castle of Nizwa, home to the Imam was built taking into account these constraints. The high crenelated walls with loopholes and downward-angled arrow slits, the fortified windows with heavy iron grills and thick wooden shutters operated from the inside, and watchtowers are the most obvious defensive signs. Other clever tricks made effective attacks difficult if not impossible. For instance, every gate was made of heavy hardwood and iron. A tiny door was inserted to force every visitor to come in individually and to bend forward while raising one’s knee high over a high still when entering, a position less than ideal to lead an attack. Stepping into the Imam’s bedroom with its refined carpets and pillows, hidden doors lead to a 17-kilometre long tunnel allowing for his safe escape and also for resupply from neighbouring villages if needed. ...... (follow the instructions below for accessing the rest of this article).
This article is featured in the app "GPSmyCity: Walks in 1K+ Cities" on iTunes App Store and Google Play. You can download the app to your mobile device to read the article offline and create a self-guided walking tour to visit the attractions featured in this article. The app turns your mobile device into a personal tour guide and it works offline, so no data plan is needed when traveling abroad.