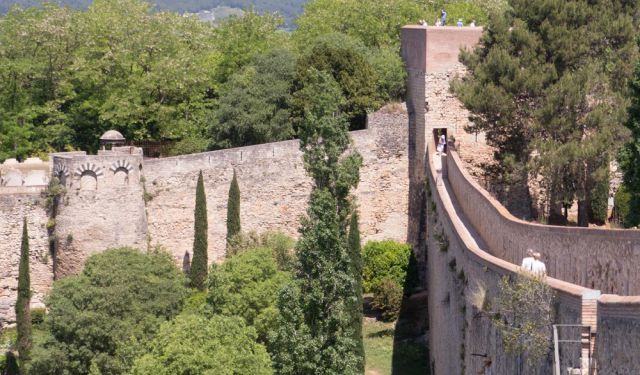 The Old Town and Walls of Girona, Costa Brava, Girona, Spain (B)

Visitors to the Costa Brava often overlook Girona, heading instead to the regional capital Barcelona. But Girona has some of the most complete city walls in Spain, medieval streets that seem hardly to have changed over centuries, and lots of traditional Catalan restaurants. What more reason could you want for spending a day (or two) exploring one of Catalonia’s major cities?

Girona’s walls exist for a good reason. Historically this was a wealthy city, causing it to be attacked and besieged on a number of occasions. The first walls were built by the Romans, but they were rebuilt and extended during the Middle Ages. Fortunately there is no risk of siege today and the walls now serve a rather different purpose, aiming to attract people to the city rather than keep them out. To this end much of the wall has been reinforced so that tourists can walk around the historical defences, only stopping at the point where the river forms a natural barrier.

We joined the wall close to the Cathedral, walking through old cemeteries and parks and past houses built into the fabric of the wall itself until we reached the recently strengthened section where you can walk along the top. Unlike some other city walls I’ve walked around these ones dip up and down, reflecting the undulating landscape. If you have a head for heights you can climb one of the lookout towers for spectacular views over the surrounding hills (even if you don’t climb to the top the views from the wall are still pretty good). And you can peer down into the town for rooftop views of the Cathedral, churches and houses. ...... (follow the instructions below for accessing the rest of this article).
This article is featured in the app "GPSmyCity: Walks in 1K+ Cities" on iTunes App Store and Google Play. You can download the app to your mobile device to read the article offline and create a self-guided walking tour to visit the attractions featured in this article. The app turns your mobile device into a personal tour guide and it works offline, so no data plan is needed when traveling abroad.