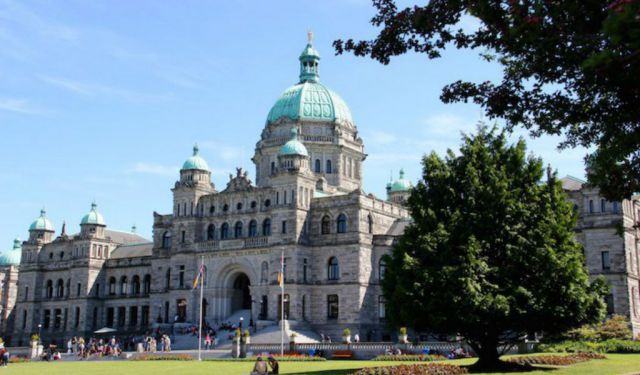 The Other Side of Victoria : A Look Beyond Whale-Watching, Victoria, British Columbia (B)

I felt the throb of the engines ramp up a notch as the powerful Prince of Whales whale-watching boat veered to the right. The First Mate, Jennifer, excitedly pointed towards the grey bulk that the Captain had spotted working its way through the frothy sea. I hurried to the open side of the boat and joined the other guests peering out across the ocean being whipped by the winds ahead of us. I soon saw a dark figure churning surprisingly easily through the choppy sea as we drew closer.

As it worked its way out to deeper sea it remained steadily above the waves and seemed to be increasing speed as we drew towards the respectful 100-metre distance limit that all whale-watching boats adhere to. Jennifer said it was one of the four bought from the British Royal Navy after 1998. Cameras clicked excitedly around me in response. Although we had not been successful finding whales on our excursion, we wanted to capture the thrilling image of the huge diesel-electric navy submarine heading out of its base in Victoria towards open sea – and on to its regular tour in the Pacific Ocean. ...... (follow the instructions below for accessing the rest of this article).
This article is featured in the app "GPSmyCity: Walks in 1K+ Cities" on iTunes App Store and Google Play. You can download the app to your mobile device to read the article offline and create a self-guided walking tour to visit the attractions featured in this article. The app turns your mobile device into a personal tour guide and it works offline, so no data plan is needed when traveling abroad.

Create Your Own Self-Guided Walks in Victoria
Guide Name: The Other Side of Victoria : A Look Beyond Whale-Watching
Guide Location: Canada » Victoria
Guide Type: Self-guided Walking Tour (Article (B))
Author: Gary Bembridge
Read it on Author's Website: http://www.tipsfortravellers.com/victoria-british-columbia/
Sight(s) Featured in This Guide: