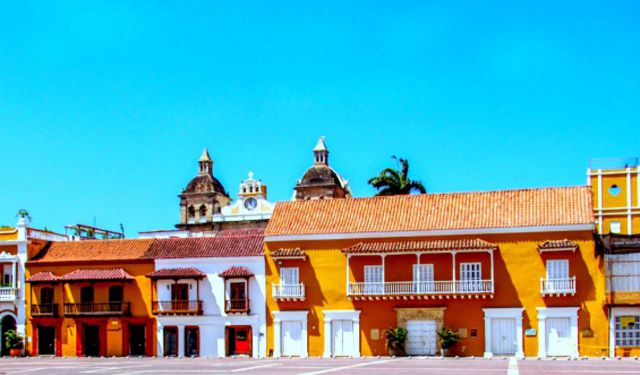 The Plazas of Cartagena's Walled City, Cartagena, Colombia (B)

I had just a few days in Cartagena and wanted to make the most of it. As such, I walked about every square inch of the Walled City along with most of GetsemanÍ in order take in the culture and history of the city. I tried visiting virtually every plaza and along the way enjoyed window shopping, people watching, dining, and seeing what the vendors had for sale.

Cartagena, founded in 1533 by Pedro de Heredia, is named after Cartagena, Spain. Strategically located between the Magdalena and Sinú Rivers on Colombia’s northeastern, Caribbean coast, the city became a very important trade port for Spain. During the colonial era (1533-1717), the port was used to export Peruvian silver and to import African slaves.

The city’s increasing importance subjected it to attacks from the French, English, and Dutch. Still a city without walls, it briefly fell to the French in 1544 until a ransom was paid. At this time a defensive tower was built, but its battery had limited range, and the city was ransacked again in 1569 and soon was destroyed by fire. Seventeen year later, Francis Drake took over the city until another ransom was paid. ...... (follow the instructions below for accessing the rest of this article).
This article is featured in the app "GPSmyCity: Walks in 1K+ Cities" on iTunes App Store and Google Play. You can download the app to your mobile device to read the article offline and create a self-guided walking tour to visit the attractions featured in this article. The app turns your mobile device into a personal tour guide and it works offline, so no data plan is needed when traveling abroad.