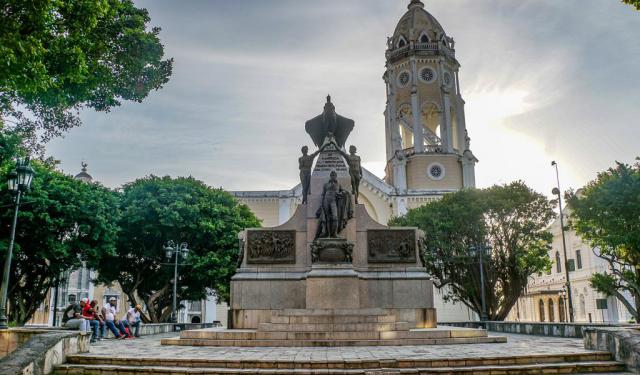 The Plazas of Casco Viejo, Panama City, Panama (B)

Casco Viejo is the old quarter in Panama City and is designated a UNESCO World Heritage Site. The hip and eclectic area features many restaurants, bars, shops, churches, and plazas. While I was studying Spanish for two weeks at Casco Antiguo Spanish School, many times I spent 30 minutes either before or after class just taking in the scene. Each plaza has a unique vibe. See the differences below.

Plaza Herrera is located near the edge of Casco Viejo on the southwest corner. It is loaded with big shade trees and features a large equestrian statue in its center of General Tomas Herrera, a patriot from the 19th century.

The plaza was once occupied by houses, but a fire in 1781 turned it into an empty lot which was used for bull fights and celebrations. When bull fighting was outlawed in 1928, the plaza took its current form.

Though no plaza is completely quiet with the honking taxis passing by, with all the greenery, this one seemed peaceful to me. I enjoyed relaxing on the benches in the morning, watching a local paint midday, and checking out the night life at the popular Casa Casco across the street. ...... (follow the instructions below for accessing the rest of this article).
This article is featured in the app "GPSmyCity: Walks in 1K+ Cities" on iTunes App Store and Google Play. You can download the app to your mobile device to read the article offline and create a self-guided walking tour to visit the attractions featured in this article. The app turns your mobile device into a personal tour guide and it works offline, so no data plan is needed when traveling abroad.