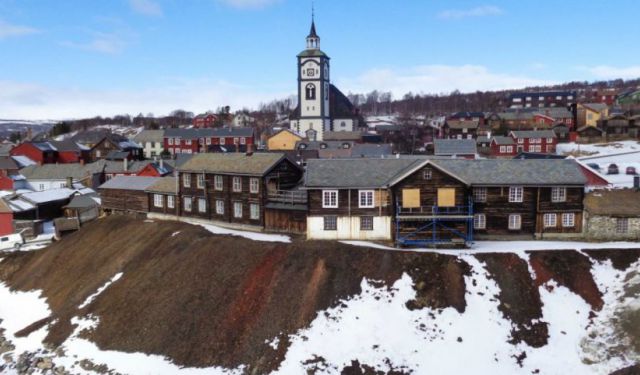 Norway is very much a country known for its coast and with good reason. One word – fjords. When I was planning my trip to Norway back in 2014, I realised that every single place I had planned was on the country’s coast. Adamant that I should try to see what the country’s interior was like, I did some research and somehow came across the town of Røros.

Lying close to the border with Sweden and south of Trondheim, Røros is very much a small and rural town. Historically a copper mining town, it was founded in 1644 and became a crucial player in the country’s industry. Mining no longer takes place in Røros, but tourism has definitely taken up the slack.

This is because the town has managed to skilfully preserve its historic wooden buildings and mining town layout. As such, UNESCO has recognised its character and value, including it on their world heritage list.

Visiting in late March, the town was blanketed in soft clean snow, a clear reminder of how far north the town still is. As I walked down into town, I saw mounds of plowed snow rising up in front of house windows, indicating spring hadn’t quite come yet. The end of winter may not have been the best time to visit, as the photos I’ve seen of Røros in summer paint it in a far more cheery, vital way. ...... (follow the instructions below for accessing the rest of this article).
This article is featured in the app "GPSmyCity: Walks in 1K+ Cities" on iTunes App Store and Google Play. You can download the app to your mobile device to read the article offline and create a self-guided walking tour to visit the attractions featured in this article. The app turns your mobile device into a personal tour guide and it works offline, so no data plan is needed when traveling abroad.