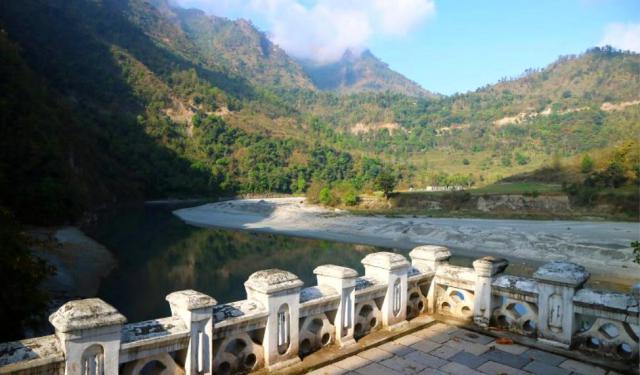 The Rani Mahal in Palpa, Nepal, Tansen, Nepal (B)

The Rani Mahal in Palpa, or Ranighat Palace, is often referred to as the “Taj Mahal of Nepal.” Although it doesn’t resemble the famous Taj Mahal visually, it does have a similar back story full of love and determination. This palace is built along the Kali Gandaki River in the Palpa District of Nepal. At the time it was built (in 1893), the palace was isolated in the middle of nowhere. Now, it’s becoming a tourist destination for those who want to witness loves bounds.

Rani Mahal translates to “queens palace” and was built by the General of Palpa, Khadga Shumsher. He had more than one wife, but his youngest and favorite wife was named Tej Kumari. Her last wish before she passed was to have a Durbar built in her memory. Thus began the creation of the Rani Mahal.

After his wife passed, he searched several locations looking for the perfect place to build. He stumbled upon the current site, but there was no way to reach it at the time other than by foot. There was also a large cliff that would need to be removed. But, he was certain this was the right place and through pure willpower, he was able to make the area suitable for a palace by overcoming any of the barriers. ...... (follow the instructions below for accessing the rest of this article).
This article is featured in the app "GPSmyCity: Walks in 1K+ Cities" on iTunes App Store and Google Play. You can download the app to your mobile device to read the article offline and create a self-guided walking tour to visit the attractions featured in this article. The app turns your mobile device into a personal tour guide and it works offline, so no data plan is needed when traveling abroad.