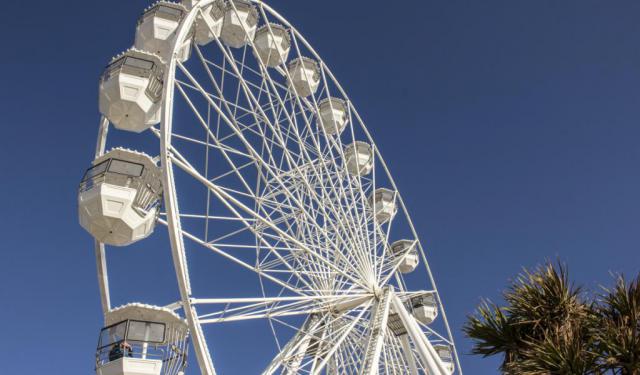 During the nineteenth century, when the Victorians decided that bathing in the sea was good for your health, there was a surge of developments on the English Coast. At that time Bournemouth, ideally placed on the stunning Dorset coast, was a desolate landscape of pine forests and heathland. By 1840 there was just one small village in Bournemouth. By 1851 its population was 695. Forty years later the population had risen to 37,000. By then Bournemouth’s now famous Pier, originally a wooden jetty built in 1855 had already been superseded by an iron pier.

Overlooking the pier from its elevated position on Bath Road is the imposing Royal Bath Hotel. The Bath Hotel opened in 1838 on the day of Queen Victoria’s coronation. It was re-named the Royal Bath Hotel, in honour of the Prince of Wales who stayed there in 1856. Famous guests that came here to enjoy the splendid surroundings of this hotel included David Lloyd George, Benjamin Disraeli and Oscar Wilde. Wilde was such a regular that the hotel’s restaurant, Oscars, was named after him. As far as the history of Bournemouth is concerned its most interesting visitor was the wealthy Merton Russell-Cotes who subsequently bought the hotel in 1876. It was refurbished and re-opened in 1881. ...... (follow the instructions below for accessing the rest of this article).
This article is featured in the app "GPSmyCity: Walks in 1K+ Cities" on iTunes App Store and Google Play. You can download the app to your mobile device to read the article offline and create a self-guided walking tour to visit the attractions featured in this article. The app turns your mobile device into a personal tour guide and it works offline, so no data plan is needed when traveling abroad.