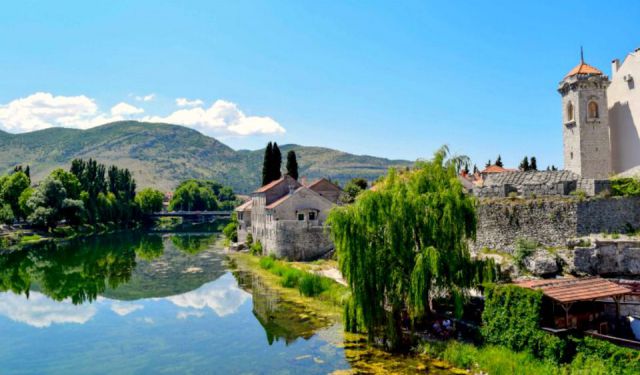 Sometimes you visit a place because they’re simply on the way to elsewhere. While travelling to Montenegro through Bosnia Herzegovina, that place for me was Trebinje. It was certainly my good fortune that I did. Beyond the capital Sarajevo and popular Mostar, the other cities of Bosnia Herzegovina don’t have a lot of name recognition yet. It’s no surprise then that places like Trebinje are mostly unknown to the wider tourism world.

Trebinje is a small city tucked away in the southernmost reaches of Bosnia and Herzegovina, right near Montenegro and Dubrovnik. The modest city is situated in a scenic valley along the Trebišnjica River and is surrounded by looming hills in most directions. It all makes for a particularly picturesque destination and if you’re looking to see more of Bosnia Herzegovina for yourself, I’d highly recommend visiting.

Found right down in the very south of the country, Trebinje is considered the main city for this corner of Bosnia Herzegovina. With only 30,000 people though, it is by no means a large city. Historically, it was situated on the road between Dubrovnik and Constantinople, an important trade route with obvious benefits for the city. With the coming of the Ottomans in the 15th century, much of the old city including a fortress was built over. This explains why so much of modern Trebinje’s historic character reflects the Ottoman period and little from earlier. ...... (follow the instructions below for accessing the rest of this article).
This article is featured in the app "GPSmyCity: Walks in 1K+ Cities" on iTunes App Store and Google Play. You can download the app to your mobile device to read the article offline and create a self-guided walking tour to visit the attractions featured in this article. The app turns your mobile device into a personal tour guide and it works offline, so no data plan is needed when traveling abroad.