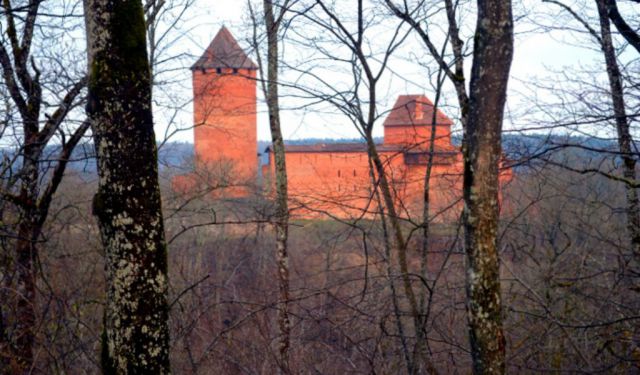 Outside of Riga, Latvia has some beautiful countryside castles in the city of Sigulda. One hiking route connects three of these ancient castles of Sigulda, Krimulda, and Turaida, along the Gauja River.

Despite the fact that it’s called the three-castle route, here you can get two for the price of one. The older one, which is basically in ruins, is the Castle of Livonian Order in Sigulda. It was built in 1207, and it’s part castle, part fortress, with accessible stairs that allow you to climb up the north tower and main gate tower. This was originally built to monitor the Gauja, so from the grounds of the Medieval Castle, you can clearly see the river valley and the other castles that are on the hiking route. Though quite desolate when I saw it in April, the castle grounds are actually used for festivals and concerts in the summer time.

In front of the Medieval castle, is the neo-Gothic New Castle of Sigulda and manor center, which was built in the 1800s as a home. It’s changed owners and functions over the years and currently houses the Sigulda District Council. Aside from enjoying the gardens of the manor, you can get the best view of the new castle from the upper tower of the Medieval Castle. ...... (follow the instructions below for accessing the rest of this article).
This article is featured in the app "GPSmyCity: Walks in 1K+ Cities" on iTunes App Store and Google Play. You can download the app to your mobile device to read the article offline and create a self-guided walking tour to visit the attractions featured in this article. The app turns your mobile device into a personal tour guide and it works offline, so no data plan is needed when traveling abroad.