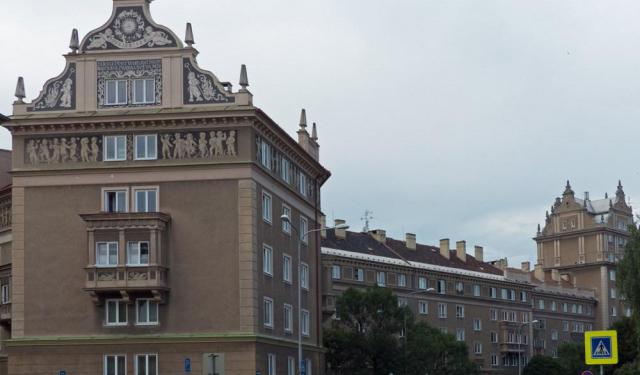 The Varied Architecture of Ostrava, Ostrava, Czech Republic (B)

Every town I visited in the Czech Republic had impressive architecture. But Ostrava, the scene for this year’s TBEX (Travel Bloggers’ Exchange) conference, was the most intriguing. It might be a bustling industrial town, but it still had the historic heart, complete with central square, that I had come to expect in a Czech city. Then there was the very different architecture of Poruba, a Soviet planned community. But most spectacular of all was the strange post-industrial landscape of Dolní Vitkovice.

Although you can see fragments of some older structures, and of the old city walls, Ostrava is a more modern city than others I visited in the Czech Republic. The old town, based around Masaryk Square, has several grand buildings, mostly from the 19thand 20th centuries. Look out for the gleaming Cathedral of the Divine Saviour, built in 1889, and for the street art and sculptures dotted around the old town.

One thing that surprised me was what at first I assumed was Soviet architecture: functionalist buildings decorated with images of workers. I found out later that this was actually early 20th century Czech design, and that this particular style pre-dated the Soviets. ...... (follow the instructions below for accessing the rest of this article).
This article is featured in the app "GPSmyCity: Walks in 1K+ Cities" on iTunes App Store and Google Play. You can download the app to your mobile device to read the article offline and create a self-guided walking tour to visit the attractions featured in this article. The app turns your mobile device into a personal tour guide and it works offline, so no data plan is needed when traveling abroad.