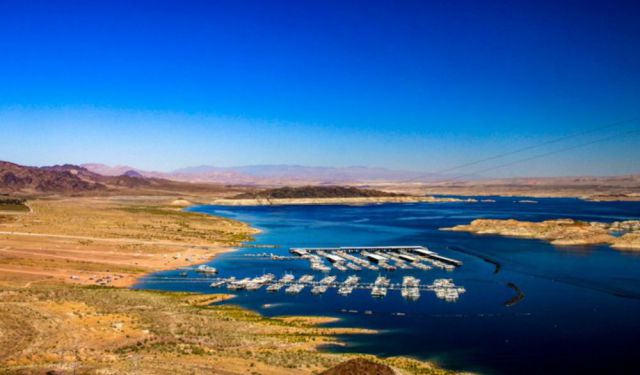 We arrived in Boulder City, Nevada on Thursday morning to compete in a triathlon at Lake Mead Recreation Area on Saturday. Not leaving until Monday evening, we had time for a mini-vacation, and found a variety of attractions in Boulder City and the surrounding area.

First, we visited Hoover Dam, which was only a few miles away from the Hoover Dam Lodge where we were staying for the event. This was my third time to Hoover Dam, though Steve’s first. We paid $10 park and walked down to the dam to take in the view of Lake Mead, the water intake towers, as well as the Pat Tillman Memorial Bridge. Then we wandered into the visitor’s center where we paid for the shortened tour of just the power plant that took place every half hour.

In the power plant, we were shown the water tunnels that transfer nearly 90,000 gallons of water each second to the dam’s hydroelectric generators. Next, we visited the 17 generators on the Nevada side of the dam. These generators are held in a wing 650 feet long which is about the depth of the dam at its base. I marvel at the construction of this dam in the 1930s every time I hear about it. Amazingly, it was built ahead of schedule and under budget. If only the government could do that now! ...... (follow the instructions below for accessing the rest of this article).
This article is featured in the app "GPSmyCity: Walks in 1K+ Cities" on iTunes App Store and Google Play. You can download the app to your mobile device to read the article offline and create a self-guided walking tour to visit the attractions featured in this article. The app turns your mobile device into a personal tour guide and it works offline, so no data plan is needed when traveling abroad.