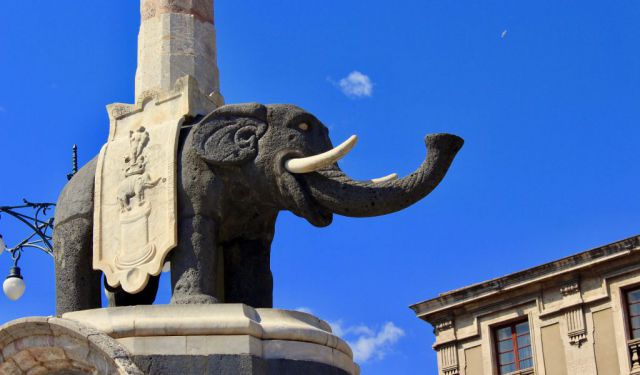 After enjoying a 3 day Malta itinerary in absolute sunny bliss I arrived in Syracuse & Ortigia, Sicily to torrential rain. I literally just walked into my hotel when it started too.

Needless to say, the weather cleared up and all was right in the world again. The Catania, Sicily weather was absolutely beautiful and I couldn’t wait to get out and explore. So…

Instead of taking the train, ferry, train combo from Syracuse all the way back to Rome. I took a train from Syracuse here to Catania. Catania is the second largest city in Sicily and located on the East coast of the island.Since Catania has its own airport I thought I could explore the city for a day then catch a plane directly to Rome.

Porta Uzeda is a gate that connects the Duomo Square to Via Etnea. This landmark in Catania was completed in 1696 and is named in honour of a Spanish nobleman- Juan Francisco Pacheco Téllez-Girón, Duke of Uzeda.

Cathedral of Sant’ Agata is a Roman Catholic cathedral dedicated to Sant’ Agata (Saint Agatha), the patron saint of Catania. The cathedral has undergone over a millennium of renovations and restoration due to earthquakes and volcanic eruptions of nearby Mount Etna. The architectural style of the Cathedral of Sant’Agata is Norman and Baroque. ...... (follow the instructions below for accessing the rest of this article).
This article is featured in the app "GPSmyCity: Walks in 1K+ Cities" on iTunes App Store and Google Play. You can download the app to your mobile device to read the article offline and create a self-guided walking tour to visit the attractions featured in this article. The app turns your mobile device into a personal tour guide and it works offline, so no data plan is needed when traveling abroad.