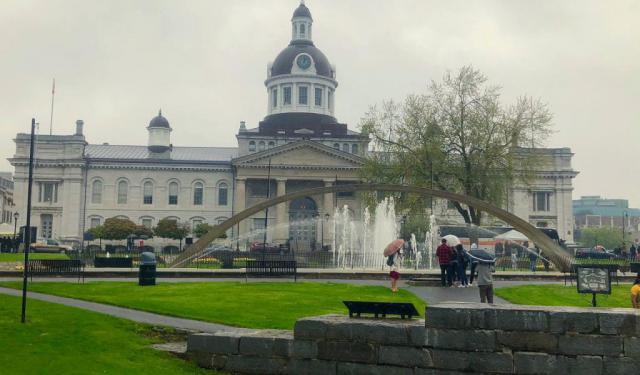 Things To Do In Kingston This Weekend, Kingston, Ontario (B)

But then two things happened since I last politely nodded and smiled. Kingston was on The Amazing Race Canada which made me excited and then the lead singer for the iconic Canadian band The Tragically Hip, Gord Downie (Kingston native) passes away at 53 which made me sad. Out of their many amazing, songs, there is one song that gives me goosebumps every time I hear it and now more than ever. The song is called “Bobcaygeon” and its the type of song that when I’m listening to it I just want to be left alone so I can think, reminisce, write, plan the future or just daydream.

Kingston is a city in eastern Ontario, Canada. It is on the eastern end of Lake Ontario, at the beginning of the St. Lawrence River and at the mouth of the Cataraqui River (south end of the Rideau Canal). The Thousand Islands tourist region is nearby to the east. Kingston is nicknamed the “Limestone City” because of the many heritage buildings are constructed using local limestone.Kingston was named the first capital of the United Province of Canada on February 10, 1841. While its time as a capital city was short (ending in 1844), the community has remained an important military installation. ...... (follow the instructions below for accessing the rest of this article).
This article is featured in the app "GPSmyCity: Walks in 1K+ Cities" on iTunes App Store and Google Play. You can download the app to your mobile device to read the article offline and create a self-guided walking tour to visit the attractions featured in this article. The app turns your mobile device into a personal tour guide and it works offline, so no data plan is needed when traveling abroad.