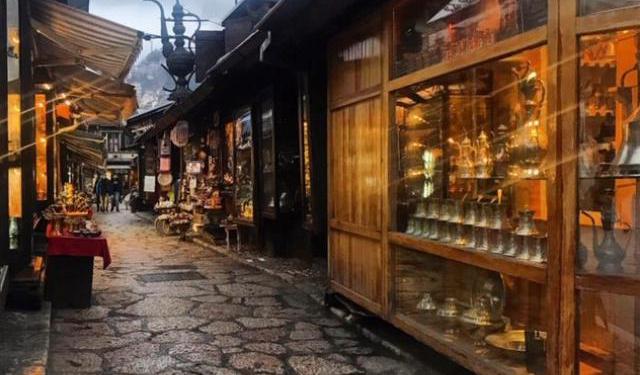 Things to Do in Sarajevo, Sarajevo, Bosnia-Herzegovina (B)

We came expecting a generic capital city, but Sarajevo surprised us at every turn. All our plans to take a day trip out of the city evaporated when we realized just how much there was to do there. If you’re considering a stop in Bosnia and Herzegovina’s capital, these are some of the things you should do in Sarajevo.

Among the specific spots in Sarajevo where important events in local and world history have taken place are the Latin Bridge near where Archduke Franz Ferdinand was assassinated, sparking World War I, and the location of the civilian massacres that took place between 1992 and 1995.

Don't miss the Sarajevo Roses, which are indentations in concrete made by explosions during the war that have been filled in with red paint as a memorial to the victims. Not all historic sights are equally grim; some of the most beautiful buildings in the city are the Gazi Husrev-Bey Mosque and the Bezistan indoor bazaar, which were attributed to Gazi Husrev-Bey, ruler of Bosnian lands during the Ottoman Empire. ...... (follow the instructions below for accessing the rest of this article).
This article is featured in the app "GPSmyCity: Walks in 1K+ Cities" on iTunes App Store and Google Play. You can download the app to your mobile device to read the article offline and create a self-guided walking tour to visit the attractions featured in this article. The app turns your mobile device into a personal tour guide and it works offline, so no data plan is needed when traveling abroad.