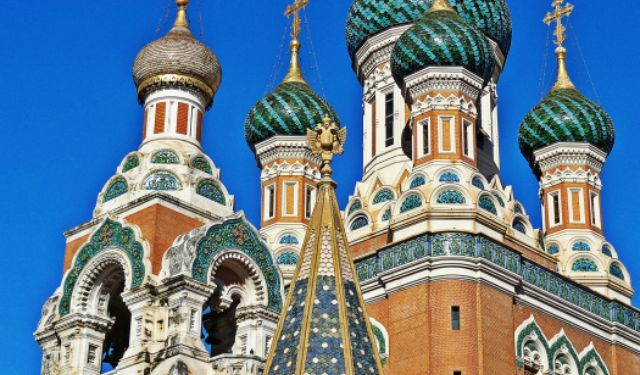 If you weren’t able to make it to Russia for the Winter Olympics, how about a trip to Nice, France? I know it’s not quite the same, but it’s warmer and you can see a lovely Russian cathedral. Nice has had a strong Russian community since the mid 1800s when the Russian nobles would spend their winters here mingling with the rest of Europe’s high society. The Tsars tended to stay home and run the country, but the more delicate Tsarinas would pass their winters in the Riviera sunshine. In Nice, a church, a chapel, and a cathedral remind us of three generations of Tsarinas who made this their winter home.

In 1856, Alexandra, age 48 and widowed, was the first Russian Tsarina to winter in the French Riviera. She came for her health, but that wasn’t the only reason. Her son, Tsar Alexander II sent her to strengthen Russia’s relationship with the King of Sardinia. (At that time this area was in the Kingdom of Piedmont-Sardinia). She was accompanied by her other son, who was commander of the Russian Navy. ...... (follow the instructions below for accessing the rest of this article).
This article is featured in the app "GPSmyCity: Walks in 1K+ Cities" on iTunes App Store and Google Play. You can download the app to your mobile device to read the article offline and create a self-guided walking tour to visit the attractions featured in this article. The app turns your mobile device into a personal tour guide and it works offline, so no data plan is needed when traveling abroad.