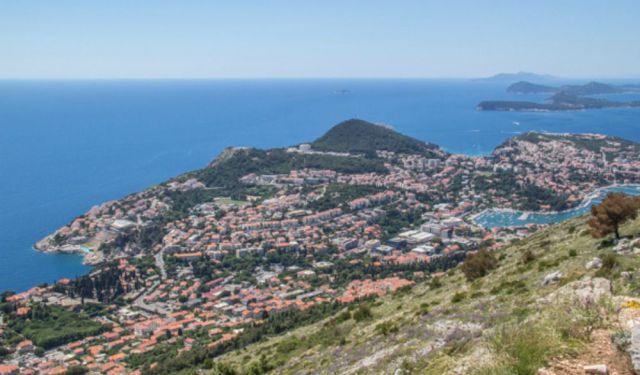 Three Tiers of Dubrovnik in Croatia, Dubrovnik, Croatia (B)

The enchanting town of Dubrovnik in Croatia attracts tourists like bees to a honeypot. As I watched them swarming through the Pile Gate into the old town I decided to start my own tour by walking the city walls. First I had to get inside the old town and made my way through the Pile Gate crossing the stone bridge that replaced the original wooden drawbridge. This drawbridge was raised at night to keep unwelcome guests out of the medieval walled city. Pile Gate is one of four gates that penetrated the old city walls. It is said the citizens of Dubrovnik had contemplated building a fifth gate but when two of their Italian rivals in trade agreed it would be a good idea plans were abandoned. However, a fifth gate, the Buža Gate was built in 1908 when Dubrovnik was part of the Austro-Hapsburg Empire allegedly to give Austrian officers easy access to the tennis courts in the trench behind the walls. The Pile Gate has an outer and an inner gate. The latter was also known as the Gate of Saint Luke, named after the church nearby. Just inside this inner gate is a flight of steps leading up to the top of the city walls (entrance fee payable). This is one of three access points on to the walls. ...... (follow the instructions below for accessing the rest of this article).
This article is featured in the app "GPSmyCity: Walks in 1K+ Cities" on iTunes App Store and Google Play. You can download the app to your mobile device to read the article offline and create a self-guided walking tour to visit the attractions featured in this article. The app turns your mobile device into a personal tour guide and it works offline, so no data plan is needed when traveling abroad.