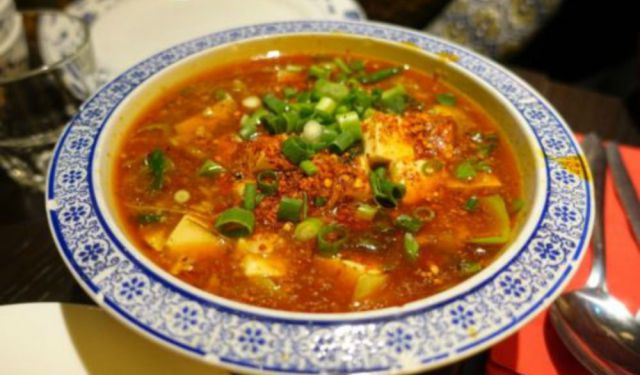 On a conference call with a guy in London the other day (we’re working on a website that involves an Amsterdam travel guide), he asked: “So what type of restaurants are there in Amsterdam? Dutch? French? Indian?” It was a fair enough question, but one that presumes we don’t enjoy the diversity here that London does. And yet I’d argue that we do – just in microcosm. Since I’ve lived here, the different types of cuisine you can eat in Amsterdam restaurants have multiplied. Ten-fold. We’ve got everything from Indonesian food (hell, Amsterdam is pretty much the European capital of Indonesian food) to Mexican food and lots in between.

“A bite of Sichuan,” reads one dish, “so Sichuan that your very existence in Amsterdam becomes an illusion.” Christ, it’s almost poetry!

Even for us Amsterdammers, however, there are still a few world cuisines that you’d never expected to find here. The city may be well known for its Surinamese population, but the number of comments and views my Beginner’s Guide to Surinamese Food in Amsterdam gets suggests that many people have still never tried it. Meanwhile, we’ve all had “Chinese” food (whatever that means when you’re talking about a country that’s as big as the whole of Europe put together) – but who’s tasted Sichuanese food unless they’ve travelled in the region? And Hawaiian food – who knew what that even included until the sudden trendiness of poké bowls?  ...... (follow the instructions below for accessing the rest of this article).
This article is featured in the app "GPSmyCity: Walks in 1K+ Cities" on iTunes App Store and Google Play. You can download the app to your mobile device to read the article offline and create a self-guided walking tour to visit the attractions featured in this article. The app turns your mobile device into a personal tour guide and it works offline, so no data plan is needed when traveling abroad.