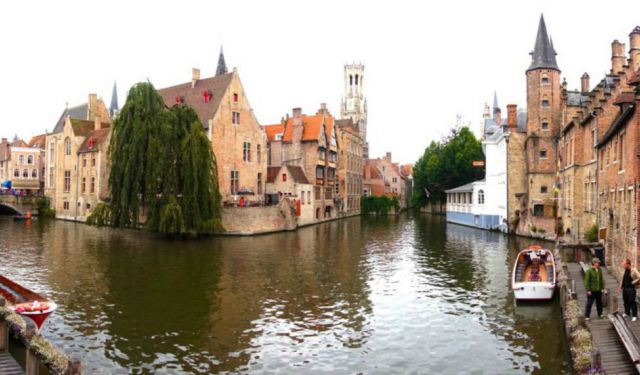 Top 5 Things to Do in Bruges, Brugge, Belgium (B)

Bruges (also known as Brugge) in Belgium is one of the most charming cities in Europe. We’ve found that it is relatively unknown compared to major destinations like Paris, London, or Rome in the minds of the typical North American traveler. Nevertheless, the crowded streets of the city center are proof that tourism is booming and it’s not going to slow down any time soon. With its picturesque canals, well-preserved medieval buildings, and cobblestone streets, the city center merited UNESCO World Heritage Site status.

We recently had the opportunity to visit for the first time, staying four nights, and were captivated at every turn. Here’s what we did:

On a daily basis, Simon – a native of Bruges and self-proclaimed historian – guides groups on a two-hour walk around his city. Although just three months into business when we arrived in Bruges, his Legends of Bruges Walking Tour had already garnered attention on TripAdvisor, and we soon found out why. (Even though it was raining the morning we went, there were still about 20 people who showed up for the tour!) ...... (follow the instructions below for accessing the rest of this article).
This article is featured in the app "GPSmyCity: Walks in 1K+ Cities" on iTunes App Store and Google Play. You can download the app to your mobile device to read the article offline and create a self-guided walking tour to visit the attractions featured in this article. The app turns your mobile device into a personal tour guide and it works offline, so no data plan is needed when traveling abroad.