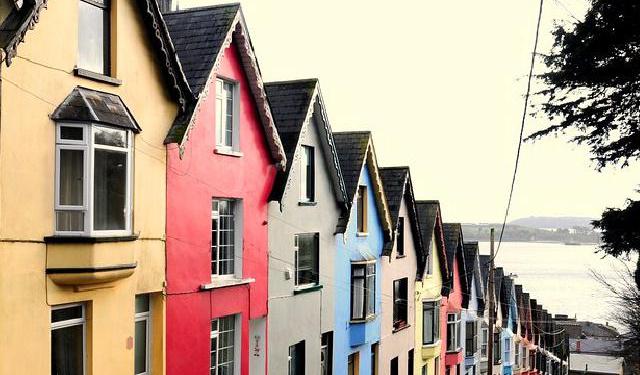 Formerly known as Queenstown (1849 – 1921), Cobh is located in Southern Ireland, just about 20 minutes drive from the city Cork. Once a fishing village which began to develop as an important port base when British established their naval fortifications, Cobh (pronounced as Cove) in Ireland, later became Ireland’s largest port of emigration moving out in search of new life, mostly to North America.

This pretty storybook town is soaked in history, and has sunk in the hearts of millions of people. Out of 6 million Irish population, about 2.5 million people emigrated between 1848 and 1950, departing from then Queenstown, now Cobh harbour. And two famous ships that carried these people had sunk in the North Atlantic Ocean, and claimed millions of life – RMS Titanic and RMS Lusitania.

We parked the car at the Cobh centre, close to the Promenade and took a long stroll getting chill breeze on a sunny, yet windy winter afternoon. This is the promenade that leads to the Cobh harbour. While walking, we noticed little colorful houses, busy coffee shops and the happy residents giving a warm smile. In summer, there would be boat trips, fishing, and lots of festival. ...... (follow the instructions below for accessing the rest of this article).
This article is featured in the app "GPSmyCity: Walks in 1K+ Cities" on iTunes App Store and Google Play. You can download the app to your mobile device to read the article offline and create a self-guided walking tour to visit the attractions featured in this article. The app turns your mobile device into a personal tour guide and it works offline, so no data plan is needed when traveling abroad.