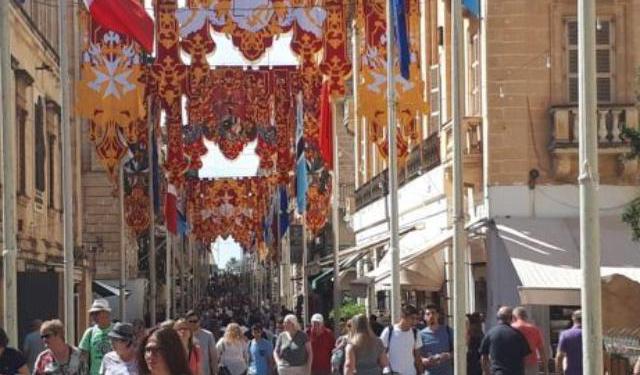 Malta’s capital is a charmer. Walk through the gates past the bus station and prepare for an uplifting experience here in Valletta – I checked into the famous British Hotel and set about backpacking the sights of Valletta. On top of this I toured Gozo and Comino (two smaller islands) and visited the only United Nations recognised country in the world with no land – The Sovereign Military Order of Malta. Thirsty Thursdays have been absent on here so much since the fake friend and liar influenced depression kicked in during 2016. Since then, I had about 400 ideas for Thirsty Thursday posts yet only wrote 4 in 16 months (on Bishkek, Starogard Gdanski, Ulan Baatar and Gdansk). I’m back today with one from Malta’s capital city.

The historical city of Valletta (which is situated high on the end of a peninsula), has a population of 6,444 (as of March 2014). Valletta is the southernmost capital of Europe and the second southernmost capital of the European Union after Nicosia, in Cyprus. Valletta has been designated European Capital of Culture for 2018. The country The Republic of Malta covers just over 316 km 2 (122 sq mi), with a population of just under 450,000, making it one of the world’s smallest and most densely populated countries (Singapore, Macau and Hong Kong are also up there). ...... (follow the instructions below for accessing the rest of this article).
This article is featured in the app "GPSmyCity: Walks in 1K+ Cities" on iTunes App Store and Google Play. You can download the app to your mobile device to read the article offline and create a self-guided walking tour to visit the attractions featured in this article. The app turns your mobile device into a personal tour guide and it works offline, so no data plan is needed when traveling abroad.