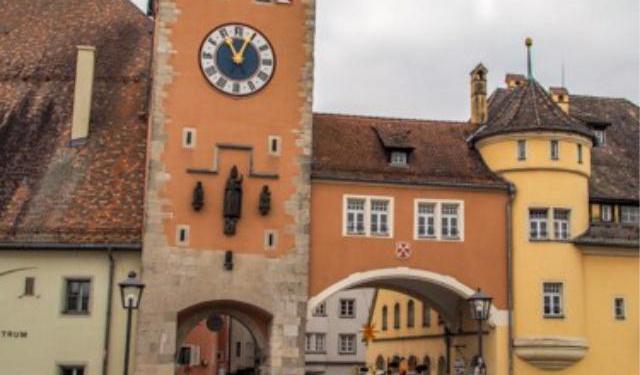 Our seventh stop on the Danube was in Regensburg, the fourth largest city in Bavaria, Germany with a population of 150,000. Due to the challenging parking, many residents bike, thus we dodged several cyclists as we walked Regensburg’s Old Town.

Regensburg’s medieval city center is largely preserved as it suffered little damage from bombing during World War II. As such, the Old Town is designated a UNESCO World Heritage Site. The initial view of the historic city is lovely.

Speaking of the historic city, the first settlements in Regensburg date back to the Stone Age when the town was called Radasbona. It is believed that during late Roman times the city was the seat of the bishop.

Fast forwarding 1,000 years, the construction of the Stone Bridge opened major international trade routes to the city. Due to trading opportunities, wealthy merchants established their residences in Regensburg which became celebrated for its gold works and fabrics. In 1245, the Holy Roman Empire designated Regensburg as an Imperial City. It kept its status until 1803 when the city was incorporated into the Principality of Regensburg along with the bishopric and monasteries. 143 years later, Regensburg, which lost its aircraft factory and oil refinery in strategic bombing during World War II, largely remained intact and became the largest displaced persons camp in Germany. The city housed 6,000 refugees, mostly Ukranians. ...... (follow the instructions below for accessing the rest of this article).
This article is featured in the app "GPSmyCity: Walks in 1K+ Cities" on iTunes App Store and Google Play. You can download the app to your mobile device to read the article offline and create a self-guided walking tour to visit the attractions featured in this article. The app turns your mobile device into a personal tour guide and it works offline, so no data plan is needed when traveling abroad.