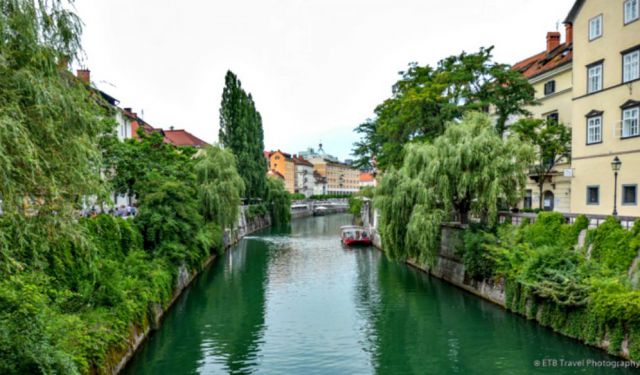 Ljubljana, Slovenia’s capital with a population of 270,000, seems smaller than its actual size. Its central walking zone is compact and nearby the Ljubljanica River that bisects the city. Many bridges cross the river while cafes line its banks.

We were only in Ljubljana for a half-day, and it definitely deserves a whole one or more. But we were able to see several of the sights on our short walking tour before we relaxed at a riverside cafe.

The Statue of France Prešeren is the meeting point for locals. It is located in the now traffic-free Prešeren Square across from the Triple Bridge. The statue looks toward a rose-colored woman, Julija, in a picture frame on yellow house who was Prešeren’s unrequited love. The statue was controversial a century ago when erected by the church as it includes a naked woman.

France Prešeren is Slovenia’s greatest poet whose works include the lyrics to Slovenia’s National Anthem.

The Triple Bridge is one of Ljubljana’s top landmarks. The middle part of the bridge which is the widest already existed before the famous architect Jože Plečnik added two side spans to more effectively funnel six lanes of traffic into one. Now of course, this area is all pedestrian which makes the city so much nicer. I can’t imagine having to dodge cars and buses in the lovely area. ...... (follow the instructions below for accessing the rest of this article).
This article is featured in the app "GPSmyCity: Walks in 1K+ Cities" on iTunes App Store and Google Play. You can download the app to your mobile device to read the article offline and create a self-guided walking tour to visit the attractions featured in this article. The app turns your mobile device into a personal tour guide and it works offline, so no data plan is needed when traveling abroad.

Create Your Own Self-Guided Walks in Ljubljana
Guide Name: Top Things to Do In and Around Ljubljana
Guide Location: Slovenia » Ljubljana
Guide Type: Self-guided Walking Tour (Article (B))
Author: Elizabeth Bankhead
Read it on Author's Website: https://etbtravelphotography.com/2018/07/18/things-to-do-in-and-around-ljubljana-slovenia/
Sight(s) Featured in This Guide: