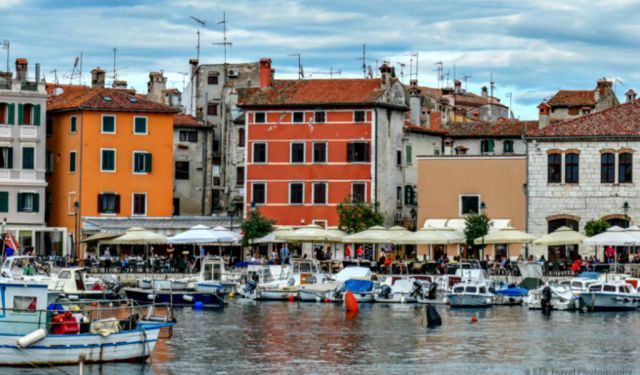 Rovinj is a lovely coastal town in Istria, Croatia with a strong Venetian influence as it was part of the Republic of Venice from the 13th-18th century. In fact, all the town signs are written in Croatian and Italian.

While the Venetians had somewhat neglected Istria, upon being seized by Napoleon and becoming part of the Austro-Hungarian Empire, the town flourished. The Austrians brought the railroad, gas lights, and a huge tobacco factory to the area. Along with cigarette making, Rovinj’s industries include fishing and tourism.

Once an island, the town was protected by a double wall, but now is a peninsula, the walls were converted into houses!

The twisty streets of Old Town which sits atop a hill are quite charming. Stroll the alleyways, browse the shops and notice all the chimneys coming from the houses. Arrive early as the afternoons are very crowded with tourists and the main streets are very busy.

The Pellizzer Family who owns two other restaurants in Rovinj decided to convert their residence which overlooks the Adriatic Sea into a third restaurant called Puntulina in 2004. The restaurant serves local cuisine with Italian influences. Reservations are required. Ask for a seat outside to enjoy the fantastic views! ...... (follow the instructions below for accessing the rest of this article).
This article is featured in the app "GPSmyCity: Walks in 1K+ Cities" on iTunes App Store and Google Play. You can download the app to your mobile device to read the article offline and create a self-guided walking tour to visit the attractions featured in this article. The app turns your mobile device into a personal tour guide and it works offline, so no data plan is needed when traveling abroad.