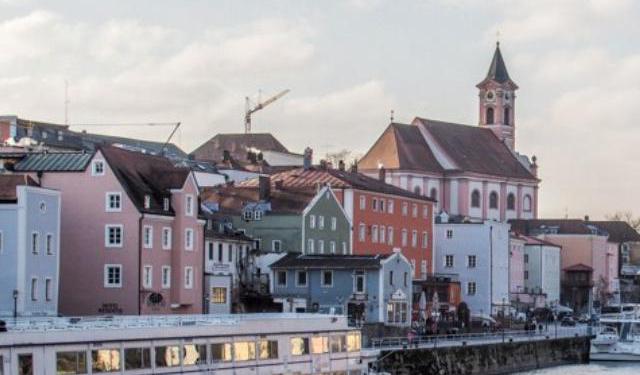 Top Things to Do in Passau, Passau, Germany (B)

Our ship sailed all night and through the morning until we reached our next destination, Passau. We docked aside another ship and walked across it (a common occurrence on the Danube) to begin our walking tour of Old Town located on the peninsula between the Danube and Inn Rivers.

Passau, a German city of 52,000 people sits on the border of Austria in the Bavaria region at the confluence of three rivers. The third being the Ilz. As such, Passau, a bishopric since 739, profited from important salt trade routes and remained independent until it was incorporated into Bavaria during the Napoleonic times of 1803.

Our tour started not far from port along Hell Street or Höllgasse. The Fisherman’s market as well as brothels used to dominate this street which is prone to flooding. It’s hard to believe the river reached 2nd story windows over 39 feet high just five years ago, while this summer, boats couldn’t even make it down the Danube because it was so low!

2013 wasn’t even Passau’s worst flood which occurred in 1501! All the floods are marked on the Town Hall, a neo-Gothic structure dating back to the 14th Century. ...... (follow the instructions below for accessing the rest of this article).
This article is featured in the app "GPSmyCity: Walks in 1K+ Cities" on iTunes App Store and Google Play. You can download the app to your mobile device to read the article offline and create a self-guided walking tour to visit the attractions featured in this article. The app turns your mobile device into a personal tour guide and it works offline, so no data plan is needed when traveling abroad.