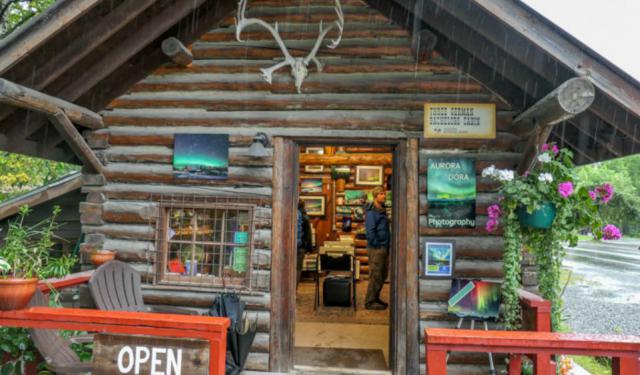 With our second backpacking trip aborted due to so much rain, we spent the next three days taking day trips from Anchorage. Our first day trip was to Talkeetna, approximately 2.5 hours away unless they are doing road construction in the summer which makes the trip over 3 hours. An alternative to driving is take the train, though it is very slow moving.

Talkeetna which began in 1916 after being chosen as the district headquarters for the Alaska Railroad is located at the confluence of three rivers, the Susitna, the Chulitna, and the Talkeetna. Approximately 800 people call Talkeetna, the gateway to Denali, home.

We stopped by the Walter Harper Talkeetna Ranger Station on the northside of the small town to watch the Mt. McKinley film. It is only 19 minutes and plays regularly. The film was very eye-opening, and confirmed I would not wish to make the three-week journey up to 20,000+ while waiting out drastic storms and low temperatures even in the summer. The elevation gain is more than that of Everest due to the low base camp. As an added bonus, there are currant bushes right outside of the building for picking a few berries! ...... (follow the instructions below for accessing the rest of this article).
This article is featured in the app "GPSmyCity: Walks in 1K+ Cities" on iTunes App Store and Google Play. You can download the app to your mobile device to read the article offline and create a self-guided walking tour to visit the attractions featured in this article. The app turns your mobile device into a personal tour guide and it works offline, so no data plan is needed when traveling abroad.