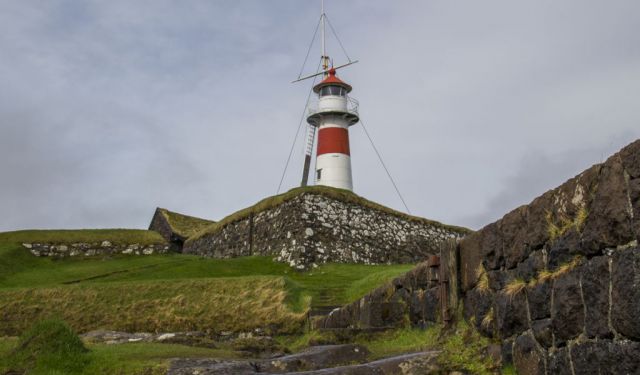 On arrival in Torshavn the capital of the Faroe Islands I caught a tantalising glance of the red and white tower of a lighthouse on a promontory at the far end of the harbour. I decided this should be my starting point and set off to investigate. At first I did not appreciate that the steps I was climbing were actually part of Skansin the only remaining fort of the four that were built to defend the town and Streymoy, its island home.

During the sixteenth century Tórshavn had become established as a trading centre and vulnerable to pirate attacks from across the North Atlantic. Magnus Heinason, the great Faroese adventurer, was given the trading rights to the islands he ordered a defensive fort to be built on this promontory in 1580.

This fort was destroyed by French pirates in 1677 because the islanders failed to meet their demand for 100 oxen, 200 sheep, 500 pairs of gloves, 1,200 pairs of stockings and 60 nightshirts. Its successor was used by the British Royal Navy as a headquarters during the Second World War. The guns that were positioned to protect the islands from a German attack are still there. Today, there is not much left of the fort but the grassy mound is a great place for a picnic while enjoying the views over the sea to the neighbouring island of Nólsoy.  ...... (follow the instructions below for accessing the rest of this article).
This article is featured in the app "GPSmyCity: Walks in 1K+ Cities" on iTunes App Store and Google Play. You can download the app to your mobile device to read the article offline and create a self-guided walking tour to visit the attractions featured in this article. The app turns your mobile device into a personal tour guide and it works offline, so no data plan is needed when traveling abroad.