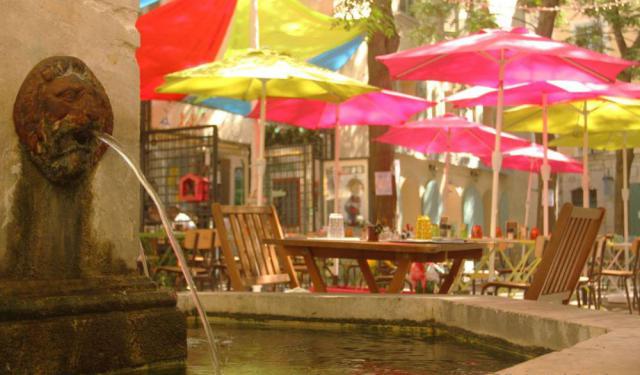 Toulon, The Rough Diamond of the French Riviera, Toulon, France (B)

Fresh basil, peaches, melons, figs, nectarines, tomatoes, lavender, thyme, olives… All these scents enter my nose as we walk through the colourful and authentic market of Cour Lafayette in the city centre of Toulon, along the Côte d’Azur in France.

Beyond these fantastic smells and the bright colours of locally-grown fresh vegetables and fruits, the friendliness of the locals is striking. Easily exchanging a few words about the RCT (the Rugby Club of Toulon where some of the best players in the world evolve), a joke or an anecdote, it feels like everyone knows each other on this lively market.

At the next crossing, freshly brewed mint tea and wood fire overpower these smells, and I sit to taste a piece of cade, a local specialty imported by the Italian immigrants during the 19th century made of chickpea flour, olive oil and water.

This snack is quite filling, and this is precisely what the blue collars working on the shipyards of Toulon needed! Along with the militaries, they formed the main part of the population of Toulon, an important military harbour since Henri IV set its baseline in the late 16th century. The French navy was created a few years later by Richelieu (1639), minister of Louis XIII and established here, creating a whole economy around it. His son Louis XIV mandated Colbert to make France a strong naval power that could rival against the British Empire. Still today, engineered by Vauban, the many forts protecting the harbour top off the surrounding hills. ...... (follow the instructions below for accessing the rest of this article).
This article is featured in the app "GPSmyCity: Walks in 1K+ Cities" on iTunes App Store and Google Play. You can download the app to your mobile device to read the article offline and create a self-guided walking tour to visit the attractions featured in this article. The app turns your mobile device into a personal tour guide and it works offline, so no data plan is needed when traveling abroad.