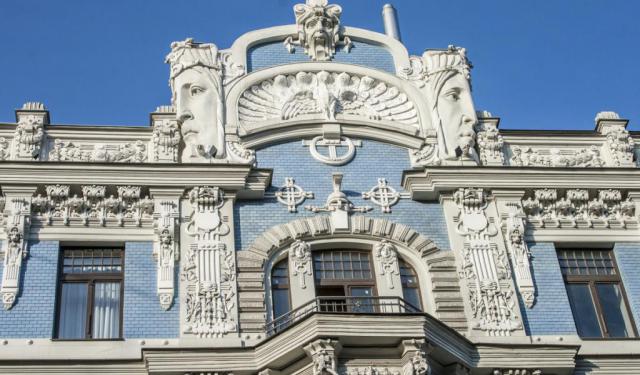 Tracing the Story of Art Nouveau in Riga, Riga, Latvia (B)

Riga is one of my favourite cities. This vibrant, busy metropolis is a mecca for lovers of architecture and in particular Art Nouveau buildings and interiors. Around a third of all the buildings in its city centre were built in this style. On my last visit there I set out to learn why this was the case.

Riga, the capital of Latvia, is often referred to as the Art Nouveau capital of Northern Europe. Art Nouveau architecture was an ornamental style that became popular throughout Europe and America between 1890 and 1910. It was an attempt to break free of the restraints of earlier, more rigid, architectural styles. A time of freedom of expression for architects. Several terms were used to describe it, Libertá (liberty) in Italy, Jugendstil (youth style) in Germany (later adopted by Latvia) and Art Nouveau (new art) in France. The latter was the general term adopted to describe this style. Initially it blossomed as elaborate decoration on the façades of buildings neither associated with the other. In general, the theme was back to nature – animals, plants and suns were most popular. But it was not long before there was a fusion between the building and its decoration. The lines of the building often took the form of stalks of flowers or tendrils of vines. Accompanied by liberal combinations of materials such as ironwork, glass and ceramics some stunning buildings were created during this period. ...... (follow the instructions below for accessing the rest of this article).
This article is featured in the app "GPSmyCity: Walks in 1K+ Cities" on iTunes App Store and Google Play. You can download the app to your mobile device to read the article offline and create a self-guided walking tour to visit the attractions featured in this article. The app turns your mobile device into a personal tour guide and it works offline, so no data plan is needed when traveling abroad.