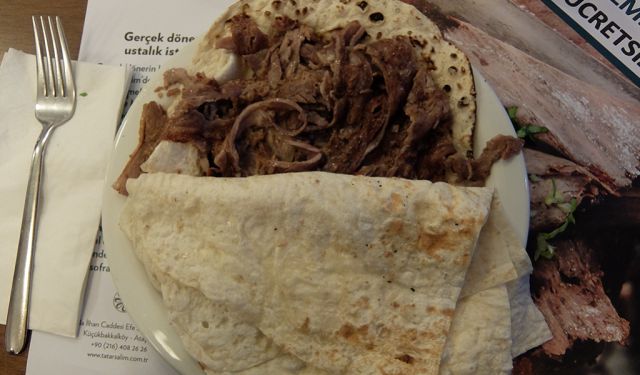 When thinking of Turkish food, Doner Kebap (Döner) would probably the first one that would come to the minds because it is a very famous food both within and outside Turkey. Doner is actually a special form of Kebap prepared by stuffing meats and wrapping around a metallic stick.

Doner means “to rotate” and Kebap means “roasted meat”. Doner is getting roasted gradually by rotating where one part faces fire. The meat is prepared thorough mixing it with suet, various herbs, and spices. Within Anatolia region, the meat that is used for doner is mostly lamb, beef, and chicken.

Doner has been a traditional Anatolian food for decades; however there is no clear information about when it was invented. It is believed that traditional Doner is inspired from Crimeans who were roasting meat on their sword.

In 17th century Evliya Celebi, a famous Ottoman traveler describes Doner in his notes as a traditional Crimean food where the locals eat at winter with “Boza” (a traditional Turkish drink). In that time, Doner was used to be roasted on a horizontal stick. After the 18th century, Doner started to be roasted on a vertical stick. ...... (follow the instructions below for accessing the rest of this article).
This article is featured in the app "GPSmyCity: Walks in 1K+ Cities" on iTunes App Store and Google Play. You can download the app to your mobile device to read the article offline and create a self-guided walking tour to visit the attractions featured in this article. The app turns your mobile device into a personal tour guide and it works offline, so no data plan is needed when traveling abroad.