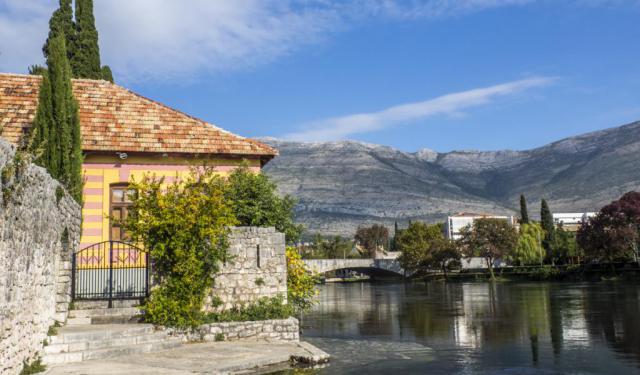 Trebinje - A Taste of Bosnia and Herzegovina, Trebinje, Bosnia-Herzegovina (B)

When I alighted in Trebinje I could not decide where to start. There was the cathedral beside me, a park ahead of me fronted by a large statue and the old city walls to my left. As I have a great affection for old towns I made my way along the city walls until I found an entrance.

Trebinje is a city located in Republika Srpska (Serb Republic), a small region of Bosnia and Herzegovina and predominantly Serbian. It has a lovely little old town. One of few I have not had to battle through crowds to appreciate the architecture. And the architecture here is unusual as this old town, also known as Kastel, was built by the Turks during the seventeenth century. Built on the site of the original town it was a part of the re-organisation of Turkish territories. It stands on the bank of the River Trebišnjica. I was soon drawn inside through one of the city gates.

Initially, Kastel was triangular in shape but it became rounded over time developing into its final shape with towers, canals and ramparts by 1740. In front of the West Gate, the historic entrance to the old town there was a drawbridge that crossed a moat. Later, fear of epidemic diseases later led to this moat being filled in. ...... (follow the instructions below for accessing the rest of this article).
This article is featured in the app "GPSmyCity: Walks in 1K+ Cities" on iTunes App Store and Google Play. You can download the app to your mobile device to read the article offline and create a self-guided walking tour to visit the attractions featured in this article. The app turns your mobile device into a personal tour guide and it works offline, so no data plan is needed when traveling abroad.