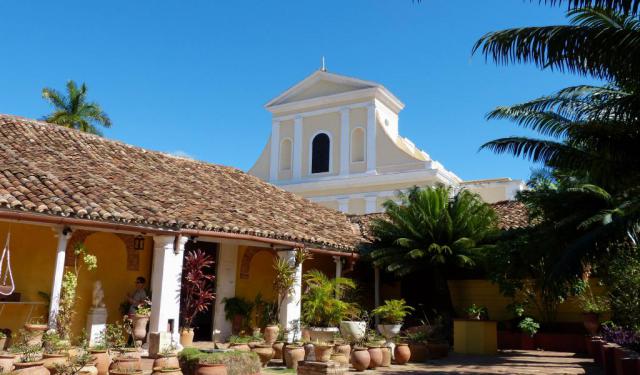 Trinidad: The Color of Cuba, Trinidad, Cuba (B)

Tucked away atop the hillside of the surrounding Sierra del Escambray mountains in Central Cuba lies one of Cuba’s most precious colonial jewels: The beautiful colonial city of Trinidad. Founded in 1514 as Villa de la Santisima Trinidad by Diego Velazquez de Cuellar, a Spanish conquistador, Trinidad has rightfully earned the reputation as one of the most beautiful and well-preserved colonial cities in all of Latin America.

Trinidad was built in an isolated place awash with beauty near an extremely fertile area for growing sugar cane, tobacco and other important crops. In Colonial times, Trinidad became one of the most prosperous cities in Cuba given its enormous sugar production in the Valle de los Ingenios (Valley of Sugar Mills) which has around 70 historic sugar mills that enriched Trinidad’s economy. Due part to greed and part to ignorance, the plantation owners did not take care of the land. They depleted the riches of the soil causing the quality of the sugar to falter which essentially ruined Trinidad’s economy. ...... (follow the instructions below for accessing the rest of this article).
This article is featured in the app "GPSmyCity: Walks in 1K+ Cities" on iTunes App Store and Google Play. You can download the app to your mobile device to read the article offline and create a self-guided walking tour to visit the attractions featured in this article. The app turns your mobile device into a personal tour guide and it works offline, so no data plan is needed when traveling abroad.