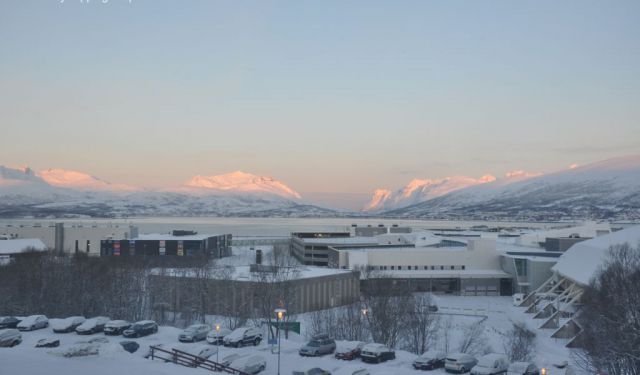 Tromso, an Arctic Gateway at 69 Degrees North, Tromso, Norway (B)

Just back from a lovely trip to Northern Norway, I can’t but boast about this largest city above arctic circle – Tromso! We were really eager to cross off Northern Lights from our never ending bucket list. And wanted to celebrate our 6th wedding anniversary somewhere romantic (Read how we spent our 5th anniversary here). Thats how Tromso trip happened to us.

Tromso is located 350kms north of arctic circle at 69 degree North. So yeah, it’s freezing cold. On a positive note, the city lies within Aurora belt which makes it one of the most favorable locations for those who wish to see Northern Lights (Aurora Borealis).

Northern Lights are the natural phenomenon that happens in the high latitude sky when the highly energized particles collide with atom. Yeah! That’s a lot of physics! I remember studying them during my school days! Tromso being one of the best places to see the stunning lights during winter, we happily booked our trip here. And after spending 6 days there, we can say with so much confidence that this has been the most expensive trips we’ve taken so far in the last 6 years! ...... (follow the instructions below for accessing the rest of this article).
This article is featured in the app "GPSmyCity: Walks in 1K+ Cities" on iTunes App Store and Google Play. You can download the app to your mobile device to read the article offline and create a self-guided walking tour to visit the attractions featured in this article. The app turns your mobile device into a personal tour guide and it works offline, so no data plan is needed when traveling abroad.