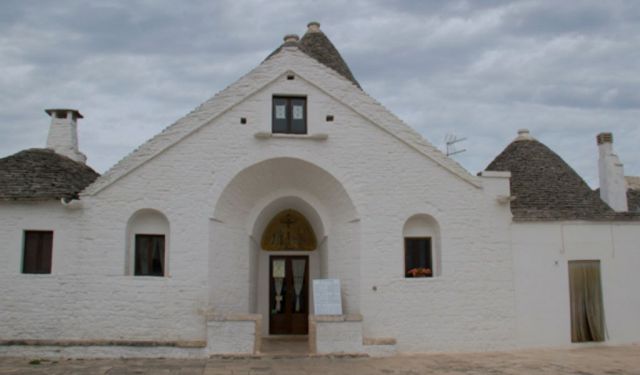 The trulli in Puglia could be the earliest recorded tax evasion scheme. It involved the use of drystone walling which was imposed on the builders of new settlements in the area from the fourteenth century as they could easily be dismantled and re-built after the tax inspector had gone. Possibly the initial purpose was because it was easy to get rid of unpopular tenants. However, it is recorded that in 1644 trulli were reduced to mounds of rubble to outwit tax inspectors sent by the King of Naples, when the region was part of his kingdom. Once the area was freed from the domination of Naples the inhabitants continued building in this style using mortar and hundreds of these buildings still exist today, notably in the town of Alberobello. Because it has more than a thousand of these curious buildings the town was declared a World Heritage Site by UNESCO in 1996.

I had no idea what to expect when I arrived in Alberobello but as it was midday (and cold) my priority was finding somewhere nice to eat so I made my way towards the centre of the town and was very surprised to find some trulli blending in with the modern housing around me. ...... (follow the instructions below for accessing the rest of this article).
This article is featured in the app "GPSmyCity: Walks in 1K+ Cities" on iTunes App Store and Google Play. You can download the app to your mobile device to read the article offline and create a self-guided walking tour to visit the attractions featured in this article. The app turns your mobile device into a personal tour guide and it works offline, so no data plan is needed when traveling abroad.