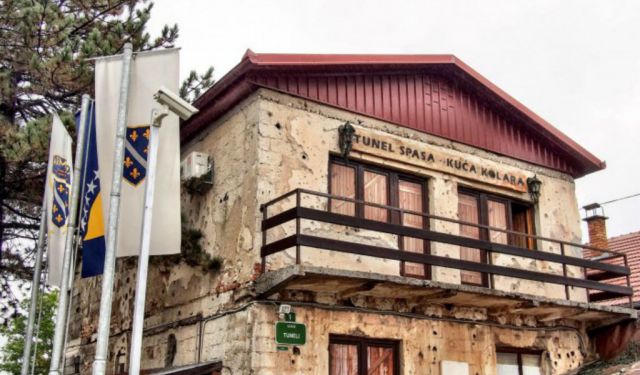 Trying to Understand the Sarajevo Siege, Sarajevo, Bosnia-Herzegovina (B)

As we rolled into Bosnia’s capital one thing caught my eye more than anything else – white crosses. Driving to our accommodations we must’ve passed thousands of them. Patches of white on the hillside and sandwiched between buildings. This, to say the least, was an eerie sight. I couldn’t help but wonder why. I knew of the Yugoslavian Wars but during that time my knowledge of the conflicts were limited to the basketball players that came from there. Now as I was passing white cross after white cross and buildings swiss cheesed with bullet holes I needed help trying to understand the Sarajevo Siege. With that in mind I hired a local guide for a day of making sense of one of the most senseless conflicts of my generation.

Our day of trying to understand the Sarajevo Siege began with a drive down the main road that became known as Sniper Alley. During the 4 years Serbia held Sarajevo, the city was cut off from the outside world. Snipers and artillery surrounded the city from the hills making any open space dangerous. This road was the worst. Showing yourself here exposed you to pot shots from the hills. Literally, for 4 years you risked your life walking the street. In the end over 1,000 people were injured on this stretch of road with 225, 60 of whom were kids, were killed. ...... (follow the instructions below for accessing the rest of this article).
This article is featured in the app "GPSmyCity: Walks in 1K+ Cities" on iTunes App Store and Google Play. You can download the app to your mobile device to read the article offline and create a self-guided walking tour to visit the attractions featured in this article. The app turns your mobile device into a personal tour guide and it works offline, so no data plan is needed when traveling abroad.