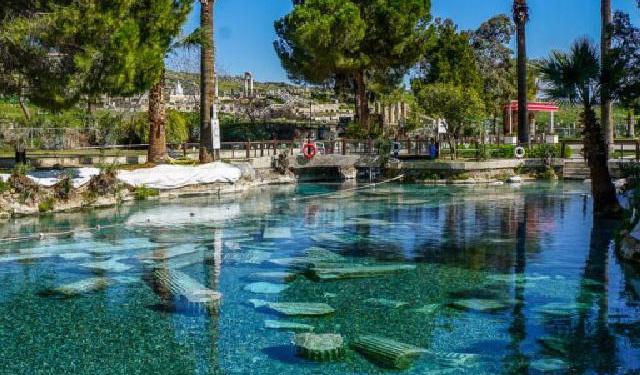 I actually signed up for this G-Adventures tour, a budget National Geographic company, specifically because the itinerary included Pamukkale. Pamukkale is a UNESCO World Heritage Site which features natural travertine terraces of thermal pools. I saw a picture of the famous site in a National Geographic magazine at least 10 years ago and have wanted to visit ever since.

I was surprised to find the Pamukkale very different from the photo. First and foremost, the natural wonder is next to ruins of a 2,000 year old city, Heiropolis. Heiropolis was founded by Eumenus II in 190 BC. Originally part of Pergamum, the city later became part of the Roman empire. Considered sacred due to the thermal waters, Heiropolis thrived and grew to a population of more than 100,000 citizens.

We started our tour of the area in Heiropolis after paying the 50 TYL ($9) entrance fee. While much of Heiropolis has been destroyed from previously constructed hotels that have since been removed, the theatre was very well maintained. It provided wonderful views of the vast grounds where doctors used the waters for cures. I couldn’t believe I didn’t know anything about the ancient thermal city which has attracted visitors for thousands of years. Check out this 7 second video for an overview. ...... (follow the instructions below for accessing the rest of this article).
This article is featured in the app "GPSmyCity: Walks in 1K+ Cities" on iTunes App Store and Google Play. You can download the app to your mobile device to read the article offline and create a self-guided walking tour to visit the attractions featured in this article. The app turns your mobile device into a personal tour guide and it works offline, so no data plan is needed when traveling abroad.