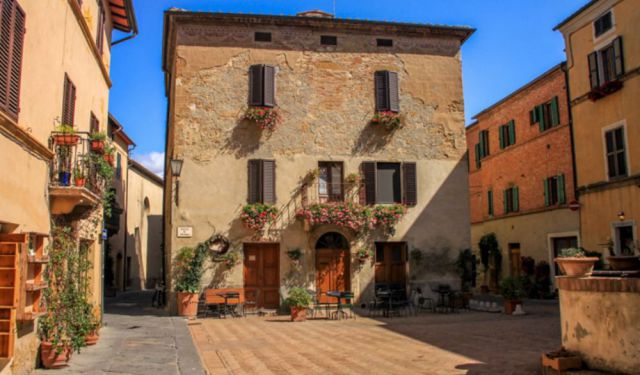 While staying on the Tuscany/Umbria border, we took day trips to many towns of different sizes. I think Pienza may have stuck out as my favorite, though each had its own unique qualities and specialties.

Pienza, located in the Val d’Orcia, was previously named Corsignano, and first referenced in documents from the 9th Century. Corsignano was the birthplace of Aeneas Silvius Piccolomini who later became Pope Pius II from 1458-1464. Once Pope, Piccolomini rebuilt his home village into a Renaissance town and named it after himself…Pienza.

Pienza’s piazza is bordered by four buildings…Palazzo Piccolomini, The Duomo, Palazzo Vescovile, and Palazzo Comunale (the town hall). The Palazzo Piccolomini currently operates as museum. With only two hours in the town and beautiful weather, I didn’t go in, but little did I know it was home to a rooftop garden! The 7 euro entry fee with a free audio guide might have worth the price of admission.

Instead I picked to visit The Duomo, its Baptistry called the Church of San Giovanni, and its underground labyrinth. The Duomo, also known as the Cathedral of Pienza, was built atop the old, crumbling Church of Santa Maria in Corsignano. Fragments of the church are on display in the Baptistry across from the high altar designed by Bernardo Rosellini. ...... (follow the instructions below for accessing the rest of this article).
This article is featured in the app "GPSmyCity: Walks in 1K+ Cities" on iTunes App Store and Google Play. You can download the app to your mobile device to read the article offline and create a self-guided walking tour to visit the attractions featured in this article. The app turns your mobile device into a personal tour guide and it works offline, so no data plan is needed when traveling abroad.